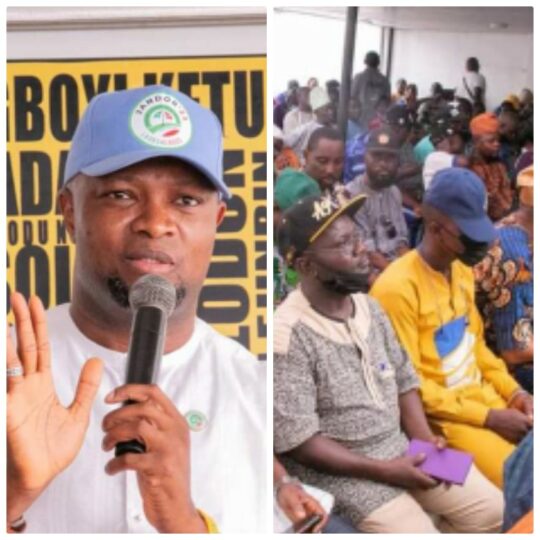 Dr. Abdul-Azeez Olajide Adediran (Jandor) has met with 245 PDP ward chairmen in Lagos in furtherance of his ambition to become the Governor of Lagos State in 2023.

Addressing the chairmen on Wednesday, Jandor expressed the need for the party to remain united to win the 2023 General election.

He noted that the APC had always taken advantage of the internal wranglings in the party to deny PDP victory.

He further explained that a united Lagos PDP poses the biggest threat to the APC in the state.

He, therefore, called on the chairmen to close ranks and shelve all differences to oust the APC come 2023.

He said: “We need to sacrifice something to remain united. I want all of you to go back home and work in unity. We must put our best feet forward in 2023. Once we shun all differences and stay united, the APC knows its days are numbered in Lagos”.

Commenting on the just concluded state congress, Jandor urged all aspirants and their supporters to keep their eyes on the ball while the aggrieved parties in the election should seek constituted means to bring closure to the issue.

“My position still remains that those who feel aggrieved should approach the appropriate quarters set up by the party to seek redress. At the end of the day, the party would be the winner. But more importantly, we must not lose focus. We must keep our eyes on the ball to take over the reins of government come 2023″.

Jandor further stated that the fact that the state congress held without rancor and violence has confirmed the PDP as a democratic party guided by due process and respect for internal democracy.

Reacting to the insinuation that he will decamp to the APC after winning the election under PDP, Jandor debunked the claim noting that it was unthinkable for an independent-minded person like him to leave a democratic party as an incumbent and return to a party run at the whims and caprices of a Godfather”.

Also reacting to a question on whether he is being financed as an APC mole in the party, Jandor dismissed the claims stating that the 7-year struggle of the movement to see a Lagos that works for all wouldn’t have just been for just making a political statement for some individual or party.

He stated: “It couldn’t have been possible for someone to be on someone’s payroll just to make a political statement. We have created an implosion in the APC that has weakened the party. We have been on this journey for seven years and it would be preposterous to think we are doing this just to be someone’s puppet”.