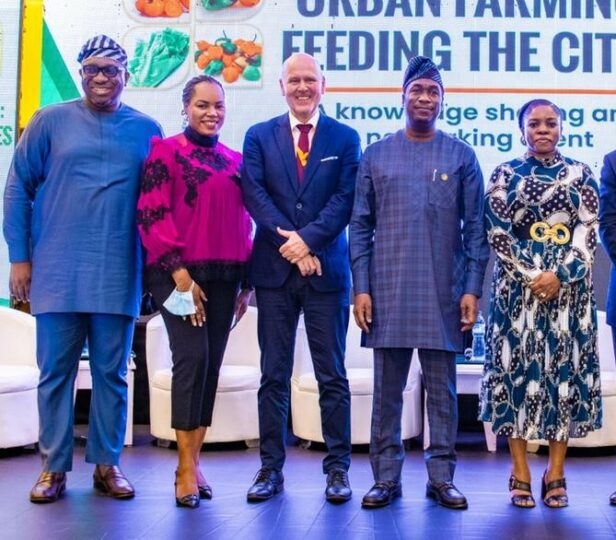 Lagos State Government is partnering with the Kingdom of the Netherlands through the Ministry of Agriculture on Urban Farming to modernize the state’s farming culture, practice.

The partnership aims to find solutions to the myriad of problems facing the agricultural sector.

The State Governor, Babajide Olusola Sanwo-Olu represented by the deputy governor, Dr Kadri Obafemi Hamzat noted that the collaboration will ensure the availability of good quality planting materials and agricultural equipment for the farmers of the State.

He said the partnership will increase local production of leafy and fruit vegetables.

Sanwo-Olu said this while speaking today at a Symposium titled Urban Farming: Feeding the Cities, a networking event between the Lagos State Ministry of Agriculture and the Kingdom of the Netherlands, at Eko Hotels & Suites, Victoria Island.

Sanwo-Olu added that urban farming initiative has the potential of improving the food basket of the urban dwellers as it will reduce spoilage of foods due to long hours of transportation which are majorly caused by vehicle breakdowns, and will also reduce the cost of transportation from rural to urban areas.

“It will provide our farmers with various agricultural inputs, technologies, equipment and other technical know-how that would stimulate aggressive and sustainable agricultural production,” he said.

While describing urban farming as adaptable, accessible, Governor Sanwo-Olu stated that it will also aid the provision of inexpensive fresh produce, particularly to low-income communities, builds bonds by stimulating the economy and providing a mutually beneficial experience, as it will reduce the need for huge capital outlay for land purchase etc.

He added that the initiative will ensure that the citizens have a steady stream of income while overcoming the challenge of food scarcity and hunger.

He further expressed appreciation for the provision of the platform for the engagement of stakeholders in the Nigerian urban farming sector with special emphasis on the State.

The Governor disclosed that his administration has prioritized agricultural production thereby making Food Security one of the cardinal programmes of the THEMES Agenda and a key strategy towards making Lagos a 21st Century economy and as such have embarked on various projects and programmes aimed at increasing food production as well as provide food security by laying more emphasis on areas where we have comparative advantage.

Earlier in her Welcome Address, the Commissioner for Agriculture, Ms. Abisola Ruth Olusanya stated that the State Government is committed to ensuring food security in the state as the government has set for itself the target to increase the quantity of food it produces and consumes from 20-24% to 40-50% by the year 2025.

She added that the state is known to be swift in the adoption of technology and innovative techniques that can provide substantial quantities of food for the populace despite the challenge of limited landmass being faced in different parts of the State.

In his remarks, the Deputy Consul General of the Kingdom of the Netherlands, Arie Plieger stated that the Kingdom of Netherlands is eager to work with Lagos State Government for innovation and sustainable agricultural growth.

“The Netherland Government is ready to share its experience with the Lagos State Government and I hope for a fruitful collaboration between Lagos State and Netherland in coming years, we are ready to support Lagos and Nigeria in its ambition to become a sustainable smart house,” he said.