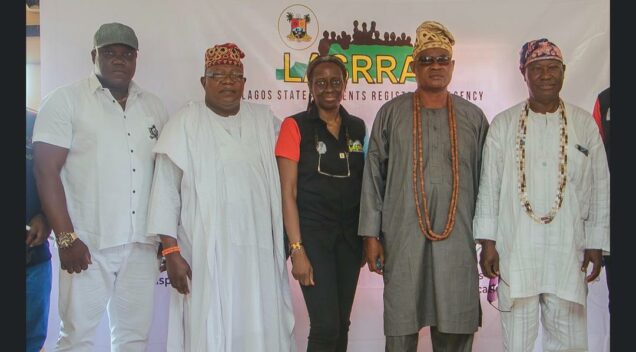 The Lagos State Government through the Lagos State Residents Registration Agency (LASRRA) has commenced the awareness campaign on the new Lagos Resident ID Card in different divisions of the State.

Speaking at the first two divisions visited; Epe and Ikorodu during her welcome address, the General Manager, Engineer Ibilola Kasunmu said that the sensitization was aimed at educating and sensitizing residents of these divisions what the LAG ID is about, why it is important and how they could key into the initiative and be a part of the plan.

Furthermore, she described it as a smart card with multiple security features and applications. She appealed to residents in these divisions to kick off their registration by visiting the LASRRA website www.lagosresidents.gov.ng then proceed to any LASRRA Registration Center nearest to them for biometrics capturing to complete the process for the new LAG ID Card, also stressing that registration is absolutely free.

Kasunmu, who spoke in the Yoruba language said: “The ID Card comes with a lot of benefits for residents. It will serve as a means of personal security and identity verification at points of accessing various government services and make access to healthcare services a lot easier for residents.

Among other benefits, having the card will also grant you access to loan applications, enable seamless payment for transportation on all Lagos State transport services like BRT and LagFerry and can also be used for cash withdrawals from the ATMs.”

She was quick to mention that those who registered before 2018 will need to update their information to get the new ID Card.

In his goodwill message, the Alara of Ilara Epe, Oba Omofolarin Ogunsanwo, represented by Surveyor Adeyemi, appreciated the State government for reaching out to people at the grassroots level on the benefits of the new ID card.

He said the Oba, being a representative of the government at this level, is in full support of the initiative and will keep informing citizens in the area to register for the card.

In the same vein, the Chairman of Ikorodu North Local Government, Hon. Adeola Adebisi Banjo who was represented by the Vice-Chairman, Mr. Ameen Olawale Apanisile, stated that the stakeholder engagements is very important because it will go a long way to create awareness amongst residents in different divisions.

The ‘New’ Lagos Resident Card is aimed at driving the smart City initiative which enables efficient planning and distribution of infrastructure, and other social amenities.