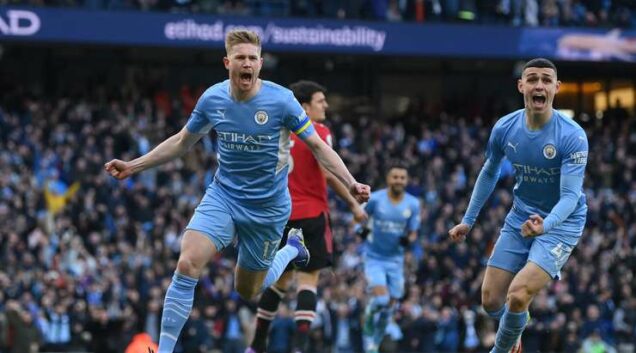 Manchester City thrashed Manchester United 4-1 on Sunday to brighten their chances of winning the league, opening six-point lead at the top.

Kevin De Bruyne and  Riyad Mahrez were the heroes as they grabbed brace each.

Cristiano Ronaldo was missing due to injury and missed United’s debacle at the Etihad Stadium as City.

De Bruyne opened scoring for City on five minutes after Bernardo Silva teed up the ball to him inside the box, and he kept his cool to find the bottom left corner.

Jadon Sancho equalised for United, collecting a wonderful pass and fired a strong low shot from distance that ricochets in off the right post.

City took the lead again six minutes later after the ball rebounded to De Bruyne after a melee in the box and he easily beat the keeper from close range.

The homers stepped up control of the game in the second half and made it 3-1 on 68 minutes.

De Bruyne delivered the corner and Mahrez found himself some space on the edge of the box and unleashed an unstoppable shot which went into the bottom left corner and past the helpless goalkeeper.

On added time, Mahrez added the fourth goal for City but the goal was initially ruled offside but VAR ruled it as a goal and it counted.