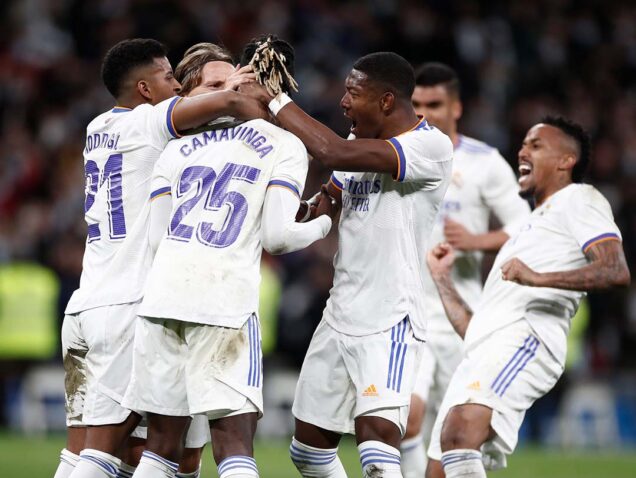 Real Madrid fought back to thrash Real Sociedad 4-1 on Saturday and extended their lead at the top of LaLiga to eight points ahead of Sevilla.

Real dominated the game but they fell behind after 10 minutes to a penalty converted by Mikel Oyarzabal after Dani Carvajal tripped David Silva.

Teenager Eduardo Camavinga came to the rescue five minutes before halftime, rifling home the equaliser from 25 metres with an unstoppable left-footer that went in off the post.

Roared on at a nearly sold-out Santiago Bernabeu, Luka Modric then put the hosts ahead with another long-range shot that flew into the top corner of Alex Remiro’s goal.

Karim Benzema, who had two goals chalked off by the video assistant referee for offside, finally scored in the 76th minute with a penalty after VAR spotted a foul on Vinicius Jr.

Ahead of Wednesday’s last-16 Champions League second-leg clash at home to Paris St-Germain, which Real Madrid trail 1-0, Los Blancos left their recent questionable performances behind them to put on a show against sixth-placed Real Sociedad.

The Basque side, who were top in the first-quarter of the season before being leapfrogged by Real Madrid, have 44 points from 27 games and are still in contention for a top four spot.

The LaLiga leaders took advantage of Sevilla’s disappointing 0-0 draw at lowly Alaves on Friday and have moved to 63 points against the 55 of their closest contender.

“This is the intensity that we need to have on Wednesday,” coach Carlo Ancelotti told a news conference.

“We can replicate today’s game against PSG. It’s a performance that inspires and give us a lot of energy and confidence to fight back from the 1-0 loss that we suffered in the first leg at Paris.”

Brazilian midfielder Casemiro, who will miss the PSG game due to suspension, thinks home advantage will be the key to reaching the quarter-finals.

“Today we showed that we can fight back and win against a great opponent. We will need to do it again on Wednesday and with fans on our side in our stadium everything is possible,” he told reporters