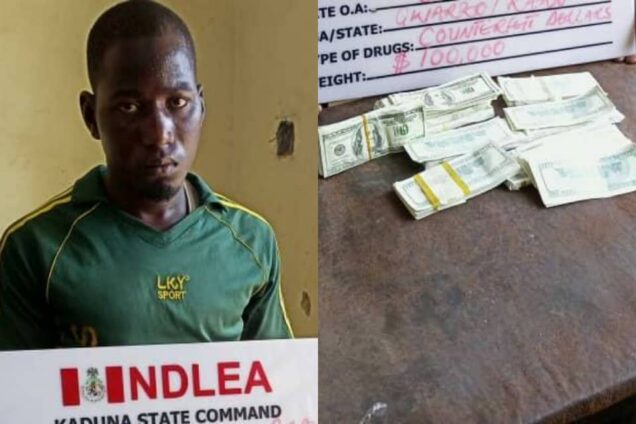 Rabiu and his fake dollars

Operatives of the National Drug Law Enforcement Agency (NDLEA) have arrested Abdulrazaq Rabi’u for being in possession of fake $100,000 notes.

He was arrested along Abuja-Kaduna expressway on 3, March, 2022, said a statement issued by NDLEA’s spokesman, Femi Babafemi in a statement on Sunday.

Babafemi did not explain further, but added that on the same day, operatives in Anambra state recovered 38,862 red star cartridges along with 13 cartons of illicit drugs when they raided a warehouse in Onitsha.

He added that in Abuja, FCT, 11 suspects were arrested and 81.2kg of drugs seized in a major raid operation on Saturday 5th March in black spots like Torabora, Karu Abattoir, Jabi motor park and Forest.

Babafemi disclosed that at the Lagos airport, one Audu Muhammed was arrested at the SAHCO export shed on Saturday 5th March with 1.550kg cannabis concealed in golden morn cereal packs meant for Dubai, UAE.

Chairman/Chief Executive of NDLEA, Brig. Gen. Mohamed Buba Marwa (Retd) commended the officers and charged them and their compatriots across the country to remain vigilant.

He said they should also be on the offensive until all drug cartels in Nigeria were completely dismantled.