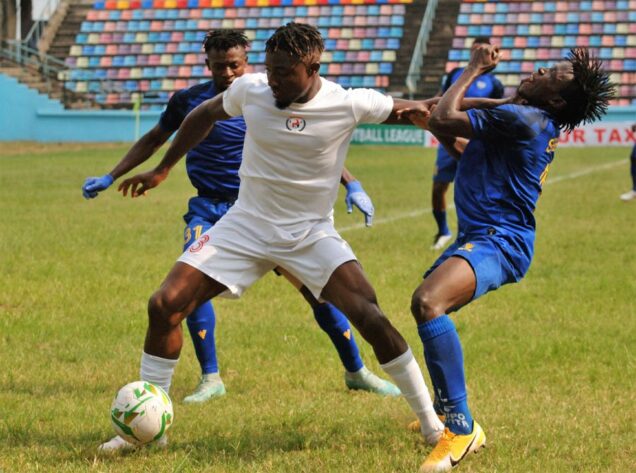 In the match played at the FC IfeanyiUbah Stadium in Nnewi, Chidiebere Nwobodo scored the only goal in the 50th minute of the encounter.

The result pushed Rangers to the third place on the log with 28 points from 17 matches, ahead of Sunday’s Match Day 17 fixtures.

Speaking after the match, the Rangers’ coach, Abdul Maikaba, said the game was a good one for both teams.

He however noted that the three points were all that his team wanted.

“I am happy we got the three points at the end, but Gombe United showed their class with young players.

“I believe we should encourage Nigerian coaches who use young players in their teams and I like the way Gombe United played. But I am happier that my players were equal to the task.

“Winning today means a lot to my team, because the result will take us to third position on the log depending on Sunday’s match results.

“Our quest was to win the match and we have won. It is just that it is difficult to win on this ground and it is a thing of joy that we are back to winning ways,” Maikaba said.

Zubairu Aliyu, the coach of Gombe United, on his part said the match result was a normal thing in the game.

“We have lost and nothing can be done about that.

“My players really fought to make sure we drew the game, but such did not materialise. All the same, it was a good match.

“We played opponents who are physically and tactically sound in terms of their approach to the game and we absorbed all the pressure piled on us in the first 45 minutes,” he said.

Aliyu however blamed the stadium’s pitch for his team’s loss, saying that his team would have gotten a better result if the pitch was not bad.

“The surface played against my team and had it been the surface was good, we would have being transiting quick to goal. All the same, it was a good match,” he said