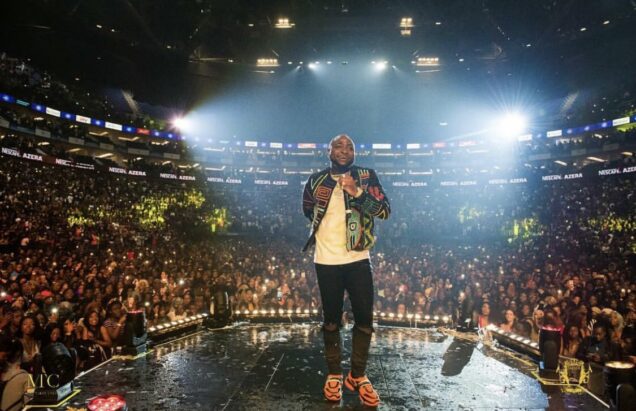 Nigerian singer and popular celebrity, David Adeleke, popularly known as Davido has acquired for himself a Mercedes-Maybach Sports Utility Vehicle (SUV) after his successful O2 Arena concert at the weekend.

Davido was supposed to finish his concert at the O2 Arena at 11 pm but overshot the time.

Authorities managing the arena told him that he would be charged an extra cost of £10,000 for every minute beyond the scheduled end time of the show.

He, however, decided to go on with the show and pay the fine as he was having an amazing time with his fans and finished at 11:34 pm (23:34) which cost him an additional £340,000 for the extra 34 minutes he spent in the show as overtime.

The ‘Assurance’ crooner in celebrating his big win decided to treat himself with some luxury gifts.

In a series of posts on his Instastory, Davido flaunted two newly acquired luxury wristwatches.

He also flaunted his newly acquired ultra-luxury Mercedes-Maybach SUV which according to Car Expert, is priced from $358,300 before on-road costs.

Davido had declared via his verified Twitter handle that part of his 2022 goals is to buy five more cars, a private jet, and 3 new houses.

Davido’s new car purchase is coming two months after acquiring a N275m 2021 Lamborghini Aventador which he is still expecting its delivery to Nigeria from Dubai.