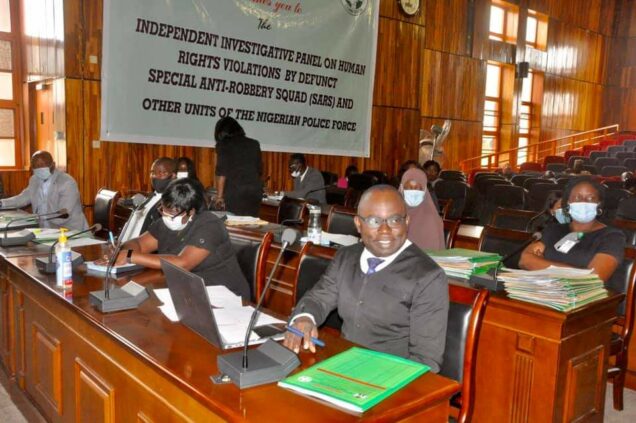 The Special Anti-Robbery Squad (SARS) and other units of the Nigerian Police.

The National Human Rights Commission (NHRC) panel investigating alleged human rights buses by the defunct Special Anti-Robbery Squad (SARS) and other police units on Tuesday ordered DCP Igbeh Ochogwu, of the Police Legal Department to appear before it with the case file of a victim of enforced disappearance, John Alozie.

The wife to the victim, Nnnena, alleged arbitrary arrest, enforced disappearance and detention of her husband by the police in a petition marked 2020/IIp-SARS/ABJ/73.

The respondents in the matter are ASP M.Obiozor of the defunct SARS Awkuzu, Anambra; Uzi Emeana; Sunday Okpe, Anambra Commissioner of Police and the Inspector-General of Police.

Mr Garba Tetengi, SAN, who represented the Chairman, rtd Suleiman Galadima, gave the order due to continuous failure of the police to make available the case.

Tetengi said the order was first made on Nov.16, 2021 among others.

” The CP legal should either come personally with the case file or send it through someone before the panel,” he ordered.

He further adjourned until March 9.

NAN reports that the panel had on Dec. 2, 2021, ordered the police to produce the petitioner’s husband as well as produce a Lexus and a Ford.

Other items allegedly taken by the police include a briefcase and documents on June 15, 2017 when Alozie was arrested.

The petitioner had in her petition before the panel, marked 2020/IIP/-SARS/ABJ/73, alleged arbitrary arrest and detention of her husband, John, by SARS operatives.