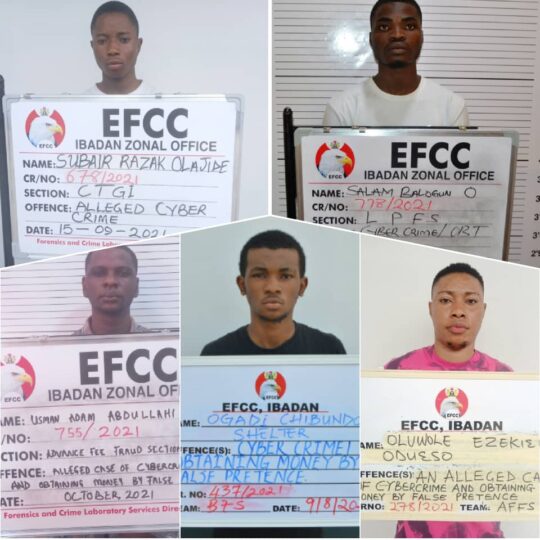 The Ibadan Zonal Command of the Economic and Financial Crimes Commission, EFCC, has secured the conviction of five cybercriminals before two courts in Ibadan.

The convictions were secured before Justice Uche Agomoh of the Federal High Court and Justice Bayo Taiwo of the State High Court, both sitting in Ibadan, Oyo State on one count charge each which bordered on fraudulent impersonation, contrary to Section 484 of the Criminal Code Law, Cap 38, Laws of Oyo State.

They all pleaded “guilty” to the charges preferred against them by the EFCC.

Upon their pleas, prosecution counsel reviewed the facts of the cases and urged the courts to convict and sentence them as charged.

Consequently, Justices Agomoh and Taiwo convicted and sentenced them.

Also, the court ordered the convicts restitute $2, 330USD, N475, 000.00, and forfeit eight exotic mobile phones and one laptop to the Federal Government of Nigeria.