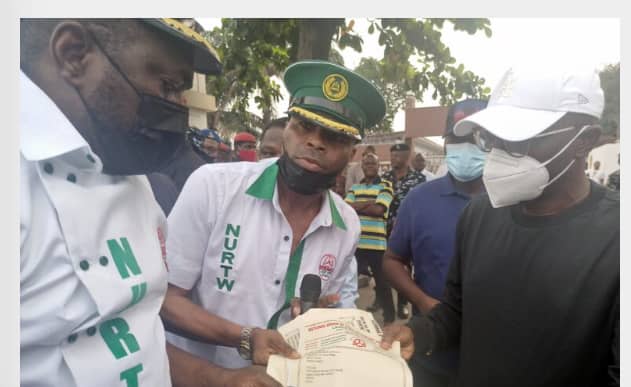 A section of the National Union of Road Transport Workers, NURTW in Lagos State have passed a vote of confidence on its chairman, Musiliu Akinsanya, popularly known as MC Oluomo.

MC Oluomo is currently in a face-off with the National Chairman of NURTW, Tajudeen Baruwa.

Members of the union loyal to Oluomo has called on Governor Babajide Sanwo-Olu to do everything within his power to forestall a repeat of bloody crisis in Lagos.

They alleged that the ongoing interference of the union’s National body in the Lagos NURTW’s affairs could trigger bloody violence as witnessed recently in the state, saying the leadership of MC Oluomo did not need external factor to avert mayhem.

The concerned drivers union, who stormed Marina, Lagos House to protest the alleged interference by external forces, said that Lagos NURTW did what they described as ‘”meddlesomeness”.

The union members, who were received by the Governor, also called on the governor to discourage interference in the union’s matter, saying management of the state tricycle operations is not within the powers of the national body of the union.

They insisted that the power to control operation of the tricycle is strictly within the internal competence of the State Executive Council.

In a letter submitted to the Governor by a team led by the Union’s State Treasurer Alhajl Mustapha Adekunle also known as Sego, the union argued that the power to manage, create and recreate branches rest within the power of the state council of the union and not the national body.

“The power to create, recreate, cancel, merge branches, units, zones is exclusively granted under Article 17[2] iv to the State Executive Council of each state and Lagos State is not an exception. The current zonal arrangement of the tricycle and motorcycle operations of the union which has assured peace is indeed commendable and should not be jettisoned.”

“The only known method of removing an elected State Executive member is by impeachment and we, therefore, frown at the query issued to our Chairman (Akinsanya) in the performance of his duties by the National President, Alhaji Baruwa, who did not appoint him. As an elected Chairman, the tenure of Alhaji Akinsanya for four years in the first instance is sacrosanct.

“We hereby pass a vote of confidence in Alhaji Akinsanya and seriously warn that this state shall not allow anyone for political considerations to tamper with her peace as is presently the situation in midst of the NURTW State Councils in Southwest,” they said.

Meanwhile, responding Sanwo-Olu, hailed the union members for not taking laws into their hands, assuring that the state would continue to do everything to ensure peaceful coexistence of residents and ensure the safety of lives and property in the state.

He said: “I have received all your messages and it will be given due consideration. As you come here peaceful, I urged you to go back to your various destinations peacefully. It is paramount as government to address to the issues with urgency they deserve.”