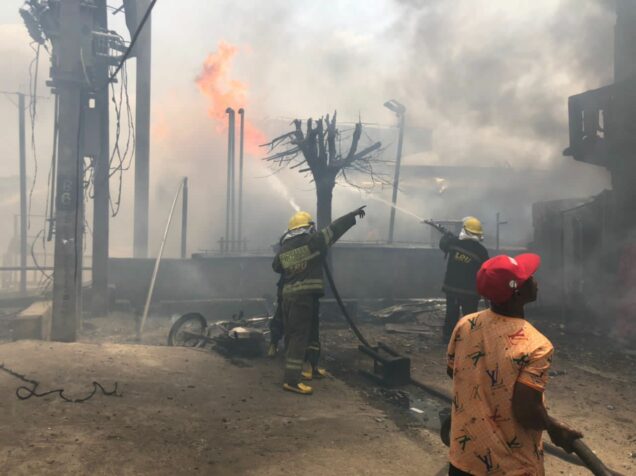 Emergency responders trying to put out the fire

A tanker discharging Premium Motor Spirit (PMS) at a nearby petrol station exploded on Wednesday, burning up a three-storey building in Mushin area of Lagos State.

Farinloye said the explosion, which occured at a Mobil Petrol Station about 1p.m , gutted the residential building located at No. 71, Agege Motor Road, Alakara, Mushin, Lagos.

He said: “No life was lost and no one was injured. Containment of the fire has been very successful. Efforts are ongoing to salvage the three-storey building from being totally consumed.

“The few items that were saved have been deposited at the Alakara Police Station which is opposite the building.”
According to him, the Mobil Filling Station has been sealed-off by the Lagos State Safety Commission.”

Farinloye said: “Presently, out of the 33,000 litres of four compartments, the explosion started while only one compartment was being discharged.

“With total control of the fire, the remaining three compartments are being discharged to ensure the safety of the community.”

He noted that though the cause of the explosion is yet to be ascertained, it was a reminder of the need for Nigerians to be very careful in handling gasoline.

Farinloye said this was especially due to the current dry season and excessive heat when little pressure could lead to a fire outbreak.

He said the agencies on the ground at the scene were NEMA, Federal and State Fire Services, Lagos State Emergency Management Agency, and the Disaster Management Unit of the Lagos State Police Command.

Farinloye said also on the ground were officers of the Federal Road Safety Corps and the Nigeria Security and Civil Defence Corps.