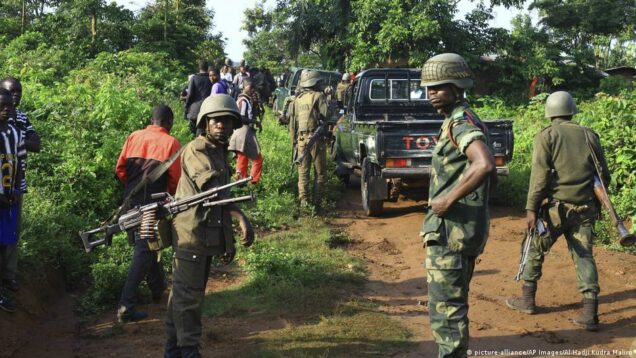 Gunmen belonging to Congo DR’s militia group CODECO, have killed 18 civilians who had sought refuge in a church compound in eastern Congo.

According to a witness and a local human rights groups, the attack took place early on Tuesday in Banyali Kilo, a district in the conflict-riven Ituri province.

The victims were sleeping slept in the church’s outbuildings.

They had fled there after escaping from previous attacks, the sources said.

A survivor, Augustin Kolo, was asleep with his family when he heard cries from outside.

“I quickly got up and woke up my wife and my two children to flee. This is how we were saved even as 18 of our brothers and sisters were killed,” he said.

“It hurts so much. We are doubly wounded since we first left our villages and then the CODECO followed us here,” he said, referring to a militia group that an army spokesman also blamed for the attack.

The spokesman gave no death toll.

CODECO is one of many armed groups active in eastern Congo, where conflict over land and resources has spurred decades of violence.

Its fighters have killed hundreds of civilians and in recent months targeted camps housing displaced people.

Congo’s army has deployed troops in Ituri and neighbouring North Kivu province but has been unable to stop the violence.

Sixty people were killed in February in an attack that the army and the other sources also blamed on CODECO.

“We are working …to restore peace throughout Ituri province. These militiamen have again attacked displaced persons who have no means of defence,” the army spokesman said.

He urged civilians to report suspect activity around displacement camps.