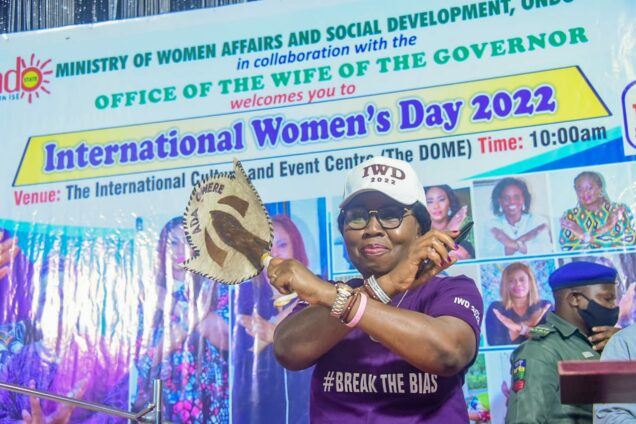 The First Lady of Ondo State, Mrs Betty Anyanwu-Akeredolu has called on women most especially to help change the narratives by properly educating the boy child towards breaking gender bias.

Akeredolu while urging women to unite across social, religious and political lines noted that all hands must be on deck to change the status of women in the society.

We all have roles to play in making sure that the status of women is improved at all fronts. We must also not lose sight of the need to strengthen the weak among us and the need to fortify the malleable ones with competent compasses as they navigate the murky socio-political terrain.

Ours is an environment where women are rarely recognised, let alone celebrated, not even when she makes equal exploits as the male counterpart.

This reality has motivated us towards identifying deserving heroes amongst us and placing them on the global page for the world to acknowledge.

This forms the hub of this gathering. I congratulate you, therefore, esteemed women, for not just witnessing another International Women’s Day but for also partaking in this epochal event that is organised to celebrate our heroes”, she added.

She also acknowledged the delays, and sometimes, denials, the girl child goes through in the society and the need to change the narratives.

Giving a keynote address, a Professor of Science and Director, Women Studies and Development Centre, Adekunle Ajasin University, Prof. Adebukola Osunyikanmi while exploring the reality of gender bias experienced by women called for concerted effort most especially among women towards ending the vice.

Prof. Osunyikanmi who said women must begin to support themselves, re-orientate the boy-child and stand up against actions that frustrate women’s progress as part of efforts towards breaking the bias, further underscored the need for more women to aspire for the top, celebrate themselves and as well for the society to integrate justice and equity into school curriculum among others.

In her goodwill message, the wife of the Deputy Governor, Mrs. Oluwaseun Aiyedatiwa while congratulating Ondo State women, enjoined women not to be threatened by the successes of another woman but to form a united front to end their vice.

Also giving her remarks, the Secretary to State Government, Princess Oladunni Odu said women are breaking the glass ceiling and as such women should become more focussed and strive towards achieving their goals.

One of the awardees, Mrs Tinu Olowofela while expressing her happiness thanked the First lady.

She encouraged other women to always put in their best to positively impact lives.

Earlier in her remarks, the chairperson of the Ondo State IWD 2022 Working Committee who is also the Commissioner For Women Affairs and Social Development, Dr (Mrs) Adebunmi Osadahun stressed that the purpose of the Women’s Day is to celebrate and uphold women’s achievement, commended Gov Akeredolu for being gender-sensitive.

She also commended him for appointing women into key positions, such as the first SSG, Female Commissioners, Chairmen and Councillors at Local Governments, Special Advisers, Senior Special Assistants, Board Members, Accountant-General among many other positions.