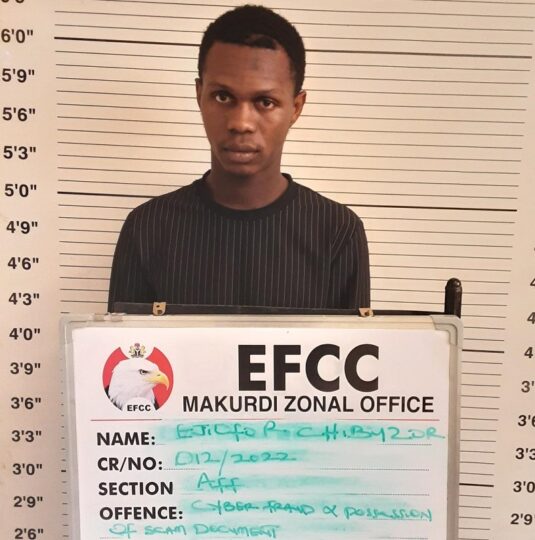 The Makurdi Zonal Command of the Economic and Financial Crimes Commission, EFCC has secured the conviction and sentencing of one Ejiofor Chibuzor for his involvement in Internet fraud.

Chibuzor was arraigned before Justice M. I. Afolabi of the Federal High Court, Lafia, Nasarawa State.

The one-count charge against Chibuzor reads: “That you Ejiofor Chibuzor sometime in January 2022 in Makurdi, Nigeria within the jurisdiction of this Honourable Court fraudulently impersonated one Max William to chart with his friends with intent to gain advantage and thereby committed an offence contrary to Section 22 (2) (a) (i) of the Cybercrime (Prohibition Prevention etc) Act, 2015 and punishable under the same Section 22 (2) (iv) of the Act”.

The defendant pleaded “guilty” to the charge filed against him by the EFCC.

Upon his plea, the prosecution counsel, G. G. Chia-Yakua prayed the Court to convict and sentence him as charged.

Justice Afolabi thereafter, convicted and sentenced Chibuzor to two years imprisonment with an option of a fine of N200,000.00.

He is to forfeit one black Laptop to be sold by auction by the Registrar of the Court with the supervision of the EFCC and the proceeds paid into the Treasury Single Account of the Federal Government of Nigeria.

In a related development, one Adegunwa Oluwaseyi Ayuba was also arraigned before Justice Afolabi of the Federal High Court, Lafia, Nasarawa State on one count charge bordering on internet fraud.

The charge reads: “That you Adegunwa Oluwaseyi Ayuba sometime in June 2021 in Makurdi, Nigeria within the jurisdiction of this Honourable Court used an access device (a login details and password) issued to another resulting in a gain of N3,300,000 (Three Million, Three Hundred Thousand Naira) which you purchased a white Acura Car with registration number Lagos FST 667 GK, thereby committed an offence contrary to Section 33 (2) (C) of the Cybercrime (Prohibition, Prevention etc) Act, 2015 and punishable under the same Section of the Act”.

The defendant pleaded “not guilty” to the charge.

Consequently, the prosecution counsel, G. G. Chia-Yakua asked the Court for a trial date and the remand of the defendant.

However, defence counsel, T. A. Ahmed informed the Court that a bail application had been filed and served on the prosecution and the Court.

He, therefore, urged the court to admit his client to bail on liberal terms.

Justice Afolabi, after listening to both parties, granted the defendant bail in the sum of N5million with one surety in like sum who must be a civil servant not below GL 12.

The case adjourned till May 24, 2022, for commencement of trial.