Gowon flags off construction of interchange flyover in Jos 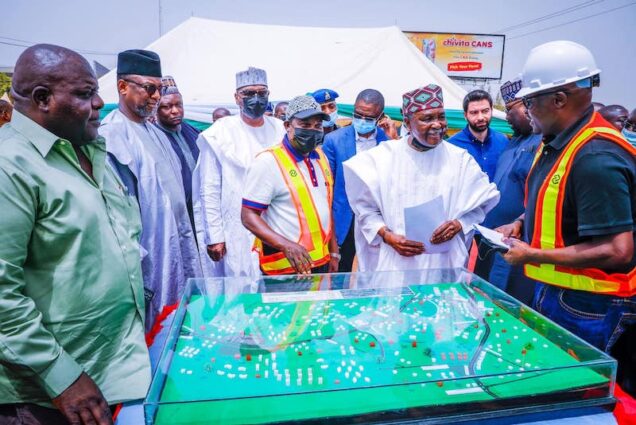 Gowon, 2nd right, with Gov. Lalong checks the design of the interchange

Elder statesman and former military Head of State, Gen. Yakubu Gowon flagged off the construction of an interchange flyover in Jos on Friday.

He lauded Gov. Simon Lalong for providing infrastructure in Plateau.

“Gov. Lalong has done exceptionally well in ensuring development in Jos and Plateau in general. I must commend him for helping the Federal Government execute development projects, though the state would be reimbursed.

“I endorse and appreciate the litany of work the governor has done in the state,’’ Gowon said.

He confirmed that he had seen the completion of abandoned projects in the state by Lalong and urged the governor to do more to leave a memorable legacy for Plateau.

Responding, Lalong promised to never abandon inherited projects, especially those with direct bearing on the lives of the people, as the contrary would amount to a waste of public funds.

The governor said the interests of the people were bigger than those of the party or his ego.

“I am happy that today, we have maintained this trajectory even in our re-casted policy vision of peace, security and good governance; sustainable economic rebirth and infrastructural development.

“In our efforts to consolidate on achievements in road infrastructure, this administration has spent about N12 billion Naira on the payment of outstanding costs of projects uncompleted by the previous administration.

“My Administration does not, and will not politicise development; it is for the good of the people,’’ he said.

Lalong affirmed that the flyover was the first road project that his administration was executing using the Public-Private Partnership option to fund.

He said the contractor, brought along a finance partner, Access Bank Nigeria Plc. to provide the funds with the state government providing the guarantee.

Lalong added that following the signing of the agreement, Access Bank mobilised the contractor with substantial funds and commitment to continue further payments on the presentation of Certificates of Valuation from the supervisory ministry.

In his remarks, Commissioner for Works, Mr Pam Bot-Mang, said the project would cost N9.9 billion.

He said owners of property along the Right-of-Way had been compensated.