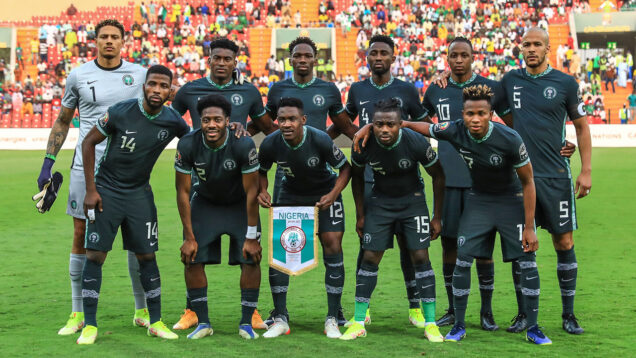 As we head towards the World Cup in Qatar at the end of 2022, two big African rival nations, Nigeria and Ghana, are set to play one another in the crucial play-off qualifiers between March 21 and 29.

The winner will secure one of the coveted final spots for the big stage.

Nigeria has had a tumultuous few months, with the sacking of their head coach, a disappointing early AFCON exit, and an underwhelming World Cup qualifying campaign so far.

It’s fair to say that for this generation of players, the clash against Ghana can make or break careers.

Football is the most popular sport in the world, bar none. For some, it’s the best form of entertainment. In Nigeria, football is a passion. It’s love, but also far more than that. It’s a religion, it’s life.

Many have played it, most watch it, and when the Super Eagles play, streets are deadly quiet as people crowd around TVs or streams on tiny screens all over the country.

To try and obtain a sense of agency, a lot of Nigerians head to their local bookmaker to place a bet on the national team (of course there are quality websites online with many betting options and bonuses).

Perhaps they put their faith in the country’s top striker. Will Alex Iwobi crank up his level, go against the odds, and deliver after being sent off against Tunisia? Many fans will superstitiously bet against their team, thinking their luck is never with them.

And if the Super Eagles lose, at least there’s a bonus: they can drown their sorrows with the bet winnings.

To continue the betting theme, the Nigerian Football Federation put all their chips on sacking Gernot Rohr just before the start of the Africa Cup of Nations. In what was a surprise for many, the Franco-German Rohr was in charge for over half a decade.

But poor results against teams ranked far lower than the Super Eagles ultimately led to his demise.

The 1-0 defeat against the Central African Republic, at home no less, was his death knell.

Some rejoiced following the announcement, while others felt it was too little, too late. With just weeks left to prepare for AFCON, Rohr’s replacement, Augustine Eguavoen was always fighting against the odds.

Would he be able to turn the tide in such a short space of time?

The answer is clear. While the Group Stages went swimmingly, with three straight victories, the same cannot be said about the Round of 16. Favourites against Tunisia, the Super Eagles struggled.

After a controversial red card and a low-quality match, the Nigerians were sent home after losing 1-0.

The start of the tournament gave fans a lot of false hope, with a trio of victories against Egypt, Guinea Bissau, and Sudan all pointing to a potential AFCON title challenge. Perhaps the excellent start added to the sense of failure following the tournament.

The fallout was extreme, with the Nigerian press hounding both coach and players for what they considered a catastrophe. Frustrated fans went even further, with some players receiving death threats after the defeat.

Can the Super Eagles Recover?

The good thing about football is that there is always another match, ready to wash away any disappointments about previous results.

Of course, the pressure has now reached extreme levels. And even though Nigeria boasts players coming from the biggest clubs in the world, there is no guarantee they will beat Ghana.

Rohr was sacked because the Nigerian Football Federation (NFF) believed he had ‘created a toxic environment’. But was he really the core of the problem, or does it run deeper than that?

To counter these concerns, there are the Group Stage results from AFCON. And the loss against Tunisia came after an opportunistic strike by Youssef Msakni, with Nigeria dominating much of the match.

The group also boasts excellent players. Iwobi was unlucky to get a red card, and he remains a goal threat.

Ndidi is a world-class talent playing in a top league, while Iheanacho can score out of nothing.

Ultimately, football comes down to moments.

Red cards, a free kick in a good position, a controversial penalty decision, the form of the day, fortune even. We won’t have to wait too long, to find out if Lady Luck is with Nigeria this month.