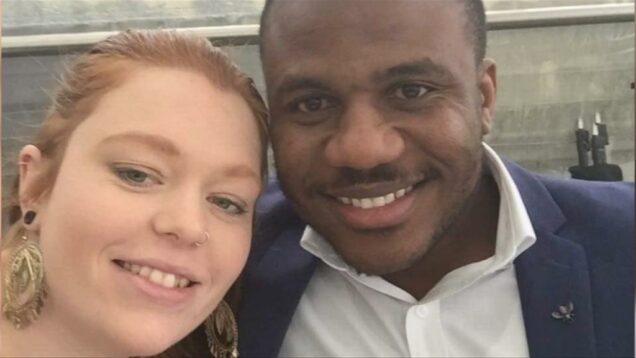 An Australia-based Nigerian Stanley Obi who was set ablaze by his jilted ex-girlfriend has died in a Brisbane hospital.

Stanley Obi, 33, suffered burns to 90 per cent of his body after his former partner Sarah Mudge doused him and his new lover in petrol.

She set them alight at their home in New Beith, Brisbane’s southern suburbs, at 3am on Thursday.

The three children of the estranged couple slept in the next room and were rescued.

Mudge, 30, died in the blaze while a brave neighbour named Al dragged the loving dad’s burning body from the wreckage.

He was raced to Royal Brisbane and Women’s Hospital in a critical condition, but he died just before 10pm on Thursday – leaving their children orphaned.

While police are still trying to piece together exactly what transpired in the lead up to the attack, it has been revealed Mudge had been angry about the outcome of a court hearing a day earlier, The Courier Mail reported.

Mudge’s Facebook profile is filled with photos and gushing posts about her children, including one saying her children gave her strength during tough times.

‘When you have no strength left, you have your children, when you are tired they energize you, and when your heart is in mourning they bring joy to your soul. To my babies I thank you for choosing me,’ she wrote.

‘The ones I have now, and the ones I am still waiting for, it is all my heart beats for. I am eternally grateful.’