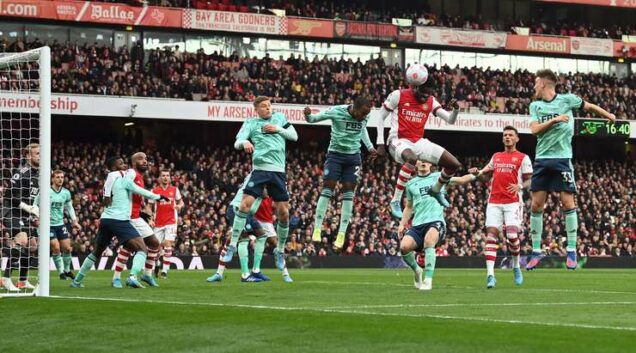 Arsenal on Saturday moved into fourth position in the English Premier League after beating Leicester City 2-0 at the Emirates Stadium.

The gunners needed to win the match to overtake Manchester United in fourth position and they did not disappoint.

Arsenal opened the scoring on 11 minutes through Thomas Partey who headed home from a corner kick.

The corner from Gabriel Martinelli went into a dangerous area and found Partey, who outjumped the defence and glanced a header into the back of the net.

Partey almost doubled for the gunners eight minutes later. He picked up a precise pass on the edge of the box and immediately unleashed a shot on goal. His effort, however, only rattled the right post.

Leicester almost equalised on 36 minutes, after Harvey Barnes jumped high to meet a cross and glanced a promising header from close range towards the roof of the net, but the goalkeeper Aaron Ramsdale pulled off a brilliant save to keep it out.

Arsenal got their second goal from the penalty spot after Caglar Soyuncu handled the ball in the box. The referee initially waved play-on, but VAR ruled that it was a penalty.

Alexandre Lacazette put the ball into the top left corner past the outstretched arm of Kasper Schmeichel.