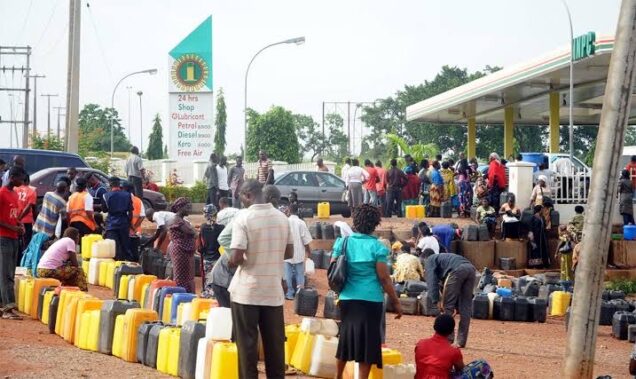 President Muhammadu Buhari has endorsed a plan to conclusively end the fuel scarcity in the country, a presidency official has said.

The official, who disclosed this on Sunday in Abuja, said the plan would ensure that incidence of fuel scarcity does not occur again.

He said that in a matter of days, virtually every state in the country would have returned to a very low queue situation at filling stations or a complete return to normalcy.

The source said the plan, which was presented to the Federal Executive Council (FEC) last week, had been signed off previously by the president before he left the country last Sunday.

The plan, according to the source, had clear goals that included a conclusive determination on the initial cause of the scarcity with attendant consequences imposed.

“The plan is designed to do everything necessary to end the scarcity quickly and hold those responsible for it in the first instance responsible so as to avoid a repeat,” he said.

The News Agency of Nigeria (NAN) reports that what used to be a recurring decimal of fuel scarcity had been reduced to the barest minimum by the Buhari administration until the recent case of adulterated petrol.

The plan drawn up by NNPC executives, however, had won the endorsement of the president and the praise of Vice President Yemi Osinbajo, especially because of the 24-hour round the clock operations.

The 24-hour sales in major supply centers in the country and 24-hour continuous loading at all depots coordinated personally by NNPC Group Managing Director, Mr Mele Kyari, with the active participation of the Director-General of the DSS, Alhaji Yusuf Bichi, are ongoing.

The 24-operations also have an enforcement element with monitoring teams “to prevent any act of sabotage and ensure smooth operations.”

By the end of the previous week, the source said the country had over one billion litres of petrol stock equivalent to about a month’s sufficiency based on the 60 million litres per day evacuation.

He said Lagos and Warri/Oghara loading zones hold the highest land stock of petrol with over 200 million litres and over 100 million litres respectively, with the balance of the stock held as Marine Stock.

According to the source, the endorsed plan also maintains the high evacuation rate which is the total amount of stock supplied until such a time that the distribution situation is normalised.

By the middle of the previous week, a National Filling Stations Queue Map presented to the presidency and at FEC indicated that fuel supply had returned to normal in the four states of Bayelsa, Akwa Ibom, Cross River and the FCT.

In another six states- Oyo, Osun, Lagos, Imo, Abia and Ebonyi–there were very small queues with mostly about 10 cars at a time.

It also indicated that in 13 states there were medium queues of maximum 50 vehicles.

In the rest of the 14 states, there were still high queues of above 50 cars at a time in the filling stations as at the middle of last week.

“The most important thing to the presidency is that this scarcity is quickly ended and a recurrence firmly avoided in the future.