Welder, barber, four others jailed in Ilorin for Cybercrime 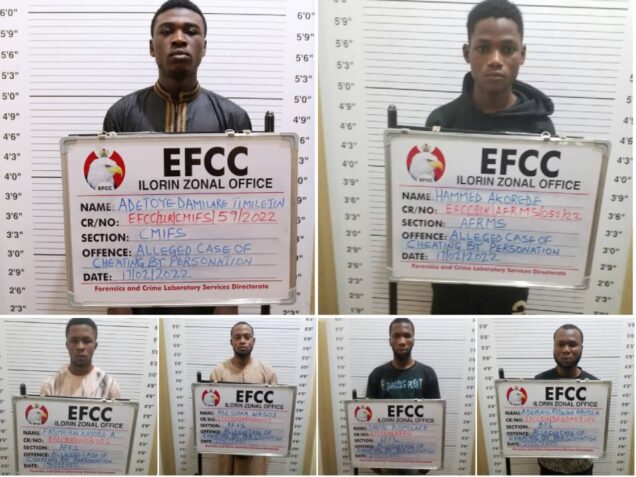 The Ilorin Zonal Command of the Economic Financial Crimes Commission, EFCC, on Monday secured the conviction of six persons for offences bordering on cybercrime, impersonation, and other internet-related fraud.

The defendants, who were prosecuted on separate charges before Justice Muhammed Sani of the Federal High Court sitting in Ilorin, pleaded guilty to their respective charges.

Following their guilty pleas, Innocent Mbachie, Aliyu Adebayo and Rasheedat Alao who prosecuted the cases on behalf of the EFCC tendered iPhones, laptop, extra-judicial statements of the defendants and several incriminating documents printed out of their devices and were admitted in evidence as exhibits.

The prosecuting counsel thereafter urged the court to convict the defendants as charged.

In his judgment on the cases, Justice Sani said the prosecution had successfully established the cases against the defendants and pronounced each of them guilty of their respective charges.

The judge sentenced Wasiu to six months imprisonment with option of fine of N200,000 and ordered that the iPhone 11 pro max which the convict used to perpetrate the crime as well as the sum of $50, which he raised as restitution be forfeited to the Federal Government.

The court also sentenced Hammed to six months imprisonment with option of fine of N100, 000. The convict was ordered to forfeit the iPhone S plus which he used to perpetrate the crime and to restitute his victim of $100.

In the same vein, Justice Sani sentenced Komolafe to six months imprisonment on each of the three counts against him with option of fine of N50,000. The sentences are to run concurrently while the total sum of N150,000 would be paid if the convicts prefers the option of fine.

The judge sentenced Fatimehin to a prison term of six months with option of fine of N50, 000. The convict is to restitute the sum of $200 (Two Hundred United States Dollars), which he benefited from his unlawful activities and also forfeit his iPhone 6S used to perpetrate the crime to the Federal Government.

Adetoye bagged six months imprisonment on each of the two counts preferred against him with option of fine of N200, 000 each count. The court ordered the forfeiture of his iPhone X and the sum of $750 which he raised as restitution to the Federal Government.

Justice Sani equally sentenced Adebayo to six months imprisonment with option of fine of N100, 000. The court also ordered the forfeiture of one iphone XR which the convict used to perpetrate the crime to the Federal Government.