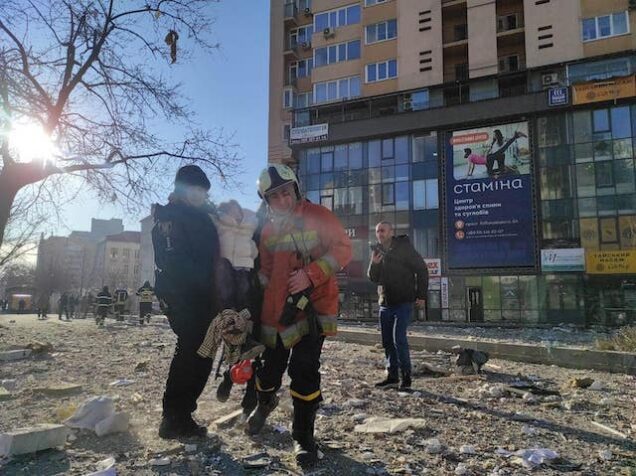 Resident of a bombed apartment being evacuated in Ukraine. CNN photo

The United Nations (UN) has injected additional 40 million dollars in emergency funding to its agencies supplying Ukrainians with cash, food, medicine and shelter.

This was disclosed on Monday by the agency’s humanitarian chief, Martin Griffiths in a statement.

It was the second allocation from the Central Emergency Response Fund (CEFR) since the Russian invasion began on Feb. 24. That same day, the UN announced a 20 million dollars injection.

“These funds are critical to get operations off the ground immediately. In the early days of our response, fast and flexible funding can make all the difference.”

The CERF funding will help provide life-saving health services, food and shelter to Ukrainians, and support flexible ways to get cash to people in need.

UN agencies have already sent in food and urgent medical supplies to Kyiv and other cities, working through networks of bakeries, shops and health facilities to get supplies in.

Where markets are functioning, aid agencies are supporting internally displaced people with cash at reception centres in western Ukraine.

The UN is deploying staff to the conflict-affected east, to operational hubs and warehouses to get food and medicines closer to those in need.

The injection of CERF funds also supports programmes for the most vulnerable people, including women-headed families, people with disabilities and the chronically ill.

A Flash Appeal for Ukraine was launched on March 1 in Geneva. It requires 1.1 billion dollars in immediate funding to support six million of the most vulnerable people in Ukraine.

Donors responded with significant initial pledges. As of today, donors have reported 219 million dollars in funding for the appeal, or 19 per cent of the requested amount.

Since its establishment 16 years ago, CERF has been one of the fastest mechanisms for providing emergency funding to people in need.

The UN thanked the more than 130 Member States and observers, as well as other donors, including private individuals, who had supported the Fund through the years.