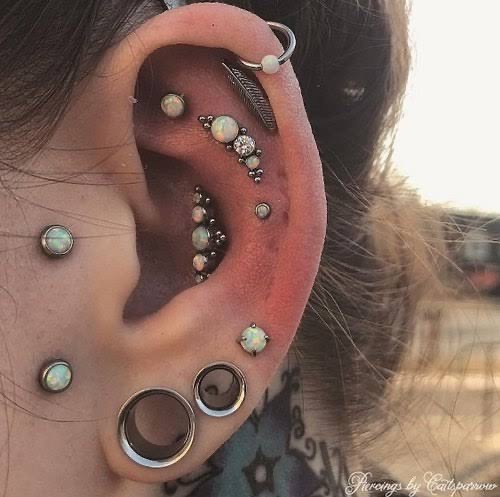 Piercings of the nose, navel, tongue, nipple and belly button are trending fashion statements that have attracted comments from the public in recent times.

The body art, especially among women young adults, whose decision to follow the trend is often not shared, is widely believed among them to improve beauty, making them attractive to admirers.

Although young adults believe that body piercing is highly acceptable among their peers; critics note that such body art might not be popular for some certain reasons, including the potential health risks of the art and integrity of the wearers.

Critics also admit that the seeming unpopularity among the skeptics of piercings notwithstanding, the concept has, of course, made an impact in fashion trend as every other youngster wishes to belong to the trend, wearing nose pins and stunning earrings.

But amid the belief of the popularity of the wearers of body piercings, there are some misconceptions bordering on health concerns such as infections, allergy, bleeding and damage to nerves, medical personnel observe.

According to them, before taking a decision to pierce the body or face, there ought to be after-care instructions to avoid complications arising from piercing guns and other instruments used in the art.

But concerned fashion lovers have asked for the reasons why people follow the trending body piercings in recent times.

Agu Chibuike, the owner of Exclusive Beauty shop in Terminus, Jos, believes that the youth want body piercing to enhance appearance and beauty.

“I think it’s all about looking beautiful and when something is trending, everybody follows and some youths pierce bodies to create such surprise and fun.

“As a beautician, I recommend whatever makes people look good and will promote such anytime”.

“The affordability of some trending fashion is what makes it easier for the majority of people to follow suit.

“I think it’s because it is affordable, piercing of nose, ears are very affordable — from N1, 000 to N1, 500 — but piercing of navel and other sensitive areas can be more expensive’’ — he explains.

He also observes that some youths pierce to appreciate their culture or to rebel against it, while other reasons may be for self-expression, aesthetic value or sexual pleasure for those that pierce genitals and tongues.

In spite of these perceptions, there are mixed reactions from the public on the values of body piercings.

But overall, most men say they like both tattoos and piercings among ladies, observers note.

Researchers claim that men with piercings are also perceived as deficient in attraction and intelligence, while they look weird, dishonest and mysterious.

In spite of this, Chibuike observes that Nigerian society seems not ready for the trends as it still frowns at such, insisting that dreadlocks and piercings are parts of culture that ought not to be seen strange.

“When you have piercings people look at you like you are wayward, I don’t think there’s anything wrong with it, it’s the same thing as piercing your ear lobes.

“Am a beautician I wouldn’t say it’s bad and I believe that piercings, just as dreadlocks, are parts of culture; it’s something we should learn to emulate and not to denounce.

“This thing is part of us, white people carry their hair long and we buy them and put them on our heads, so I don’t see why we criticise the trend,’’ he says.

But the resident Pastor of Dwellers Assembly in Jos, Pastor Harrison Ofou, observes that nose piercing and other body modification such as dreadlocks are borrowed arts that Nigerians emulate but the practice makes the carrier look unkempt.

He points out that the scriptures I Timothy 1:9 stipulates a pattern of dressing required of the Christian woman, which must be based on moderation “and not aim to be sexy as women now tend to do with this trends,’’ he says.

Similarly, Islamic scholars insist that piercings of body are forbidden in Islam.

A notable Islamic scholar at the Islamic Institute of Toronto, Ontario, Canada, says no Muslim, who is conscious of his religion, should ever contemplate such activities.

“There is nothing at all surprising about all of these, for every unnecessary tampering with Allah’s creation is bound to produce adverse repercussions. This fact alone warrants declaring body piercing as forbidden.

“We are not allowed to alter or tamper with our physical faculties unnecessarily; we are only permitted to interfere with them in order to correct a natural deformity or repair or remedy an ailment.

“Any other form of interference or tampering with our body is akin to altering Allah’s creation which has been condemned in the Qur’an,’’ he says.

This belief notwithstanding, a consultant surgeon in Jos University Teaching Hospital, Dr Akintunde Akintayo, believes that nose piercings are akin to ear piercings and as such they “are harmless except for skins that are prone to keloids — a kind of overgrown scar.

“If the person’s skin does not have a problem with keloid, then there’s nothing wrong with it, it is just like the ear piercings.

“But if the person has a problem with scar formation, he’s going to be in big trouble, it will develop keloid and the aim of being fashionable will be defeated.

“Otherwise nose piercings are just a social trends, borrowed culture from the Indians which is cultural for them’’.

But a journalist with the Federal Radio Cooperation of Nigeria in Jos Lisa Gwamzhi, believes that the society should focus more on the character of a person rather than their appearance, observing that the wearers of body piercings always receive public bad comments.

“I think society should concentrate more on the content of character of people than their physical appearance; except if the appearance in itself is responsible for the persons conduct.

“I have a fragile scalp, which hurts whenever I plait or have to lose the plaited hair but with the dreadlocks, it’s less expensive, less painful and super convenient.

“As for piercings, I’m no fan of that, even though I once admired nose piercing, I really don’t see it as a big deal.

“If the piercing is not stressing anybody besides the carrier, I don’t think it should be a problem”, she observes.

A member of the National Youth Service Corps (NYSC), Miss Gloria, observes that she considers piercings “as just every other fashion statements that are personal and people shouldn’t be judged by it because fashion is subjective.

“The only reason I don’t have a piercing is because of the fear of the pain involved in the process.

“People with piercings are often perceived as irresponsible which isn’t always the case; Africans usually judge appearances with a moral lens but societies are more receptive of these fashion statements more than others; Plateau isn’t one of the societies’’.

All in all, medical personnel warn that infection is the greatest risk to piercings.

According to them, if piercings are not performed by a qualified professional, adhering to strict hygienic procedures, serious infections can be spread from one client to the next.

Such infections can include HIV, hepatitis and tetanus, among others; and even if piercings of the body are performed hygienically, infections can still occur, they warn. NAN