Standing ovation for Zelenskiy in U.S. Congress after impassioned speech 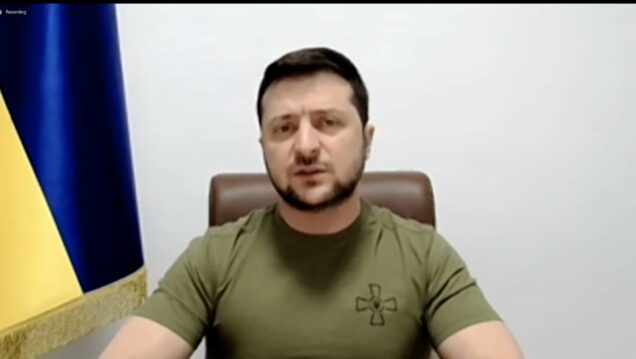 Ukrainian President Volodymyr Zelenskiy on Wednesday made an urgent appeal to the U.S. Congress for more help in fending off a devastating Russian invasion that began 24 February.

It has sent a wave of refugees fleeing his country.

He reminded Congress of September 11 terrorist attack, drawing similarity between it and the Russian aggression.

In his speech, Zelenskiy made a plea for more aid.

He asked for combat aircraft to help Ukraine fend off aerial attacks by Russia.

He asked for more weapons and called for the declaration of humanitarian ‘no fly zone’ over Ukraine.

Reacting to concerns by President Joe Biden and many U.S. lawmakers that imposing a no-fly zone could escalate the conflict with nuclear-armed Russia, Zelenskiy asked for more planes and air defense systems.

“Russia has turned the Ukrainian sky into a source of death,” he told a meeting of the House of Representatives and Senate. “I need to protect our skies.”

He asked that all American companies must leave Russia, because it is flooded with Ukrainian blood.

Zelenskiy’s virtual address comes a day after he made a plea to Canada’s parliament for more Western sanctions on Russia and the imposition of a no-fly zone over Ukraine.

“We are not asking for much. We are asking for justice, for real support,” Zelenskiy told Canadian lawmakers on Tuesday. read more

A no-fly zone is a step U.S. President Joe Biden and NATO allies have resisted out of a fear of escalating the war that began with Russia’s Feb. 24 invasion.

Biden on Tuesday signed into law $13.6 billion in emergency aid to Ukraine to help it obtain more weaponry and for humanitarian assistance.

Biden was expected to announce an additional $800 million in security assistance to Ukraine later on Wednesday in remarks on U.S. aid to the country, a White House official said.

Zelenskiy has sought in recent weeks to shore up support for his country in various speeches to foreign audiences, also including the European Parliament and the British Parliament.

Support for Ukraine is a rare instance in which Republicans and Democrats have aligned in a sharply divided Congress, with some lawmakers in both parties urging Biden to go further in helping Ukraine.

There is some bipartisan support in Congress for rushing combat aircraft to Ukraine.