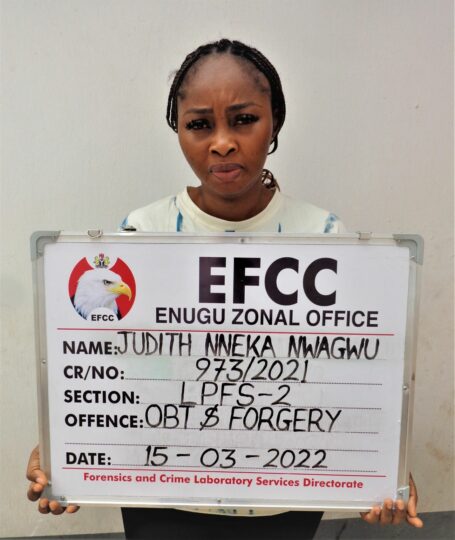 The Enugu Zonal Command of the Economic and Financial Crimes Commission, EFCC, today March 16, 2022, arraigned Judith Nneka Nwagwu, a staff of the United Bank for Africa.

Judith was arraigned before Justice D.A Onyefulu of the Anambra State High Court sitting in Onitsha on a seven-count charge bordering on forgery and obtaining by false pretense to the tune of N452,047,000.

Judith is alleged to have fraudulently obtained N192,000,000 (One Hundred and Ninety Million Naira) from a complainant whom she was his account officer, on the pretext that the bank had $400,000 for sale at the rate of N480 per Dollar.

Her employers also petitioned the Commission alleging that the defendant forged two fixed deposit certificates and fraudulently obtained the total sum of N260,047.000 ( Two Hundred and Sixty Million, Forty-Seven Thousand naira)Million from a customer under the guise of fixing the money for him.

Count 6 of the charge reads, “That you Judith Nneka Nwagwu, while being an employee of the United Bank of Africa Plc Onitsha Branch, sometime in 2021 within the jurisdiction of this court did make a false document titled “Malaexchio Global Limited with the value of N141,347,289,25 knowing same to be false and with the intent that it may be acted upon as genuine to the prejudice of Anthony Unigwe and United Bank For Africa Plc and you committed an offence contrary to Section 436 of the Criminal Code Law, Cap 36, Anambra and punishable under Section 444(3)(h) of the same law”.

She pleaded not guilty when the charges were read to her prompting prosecution counsel Michal Ani to ask for a date for the commencement of trial.

Justice Onyefulu granted her bail in the sum of N10 million with a surety in like sum. The surety must be resident within the jurisdiction of the court.

Justice Onyefulu adjourned the matter till May 11, 26, and June 8, 2022, for trial – Wilson Uwujaren, EFCC’s spokesman confirmed the development.