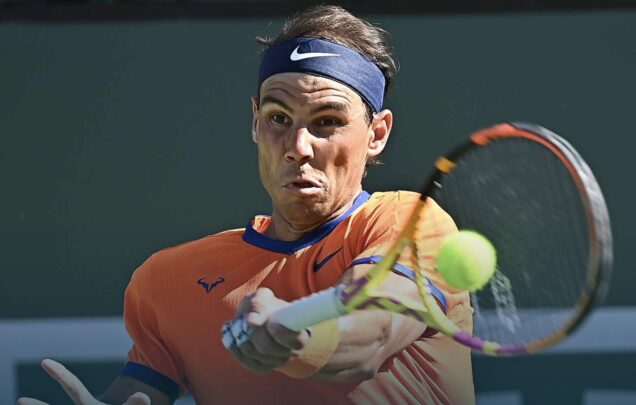 Rafael Nadal stretched his unbeaten run to 19 matches Thursday, as he overcame a comeback attempt from Nick Kyrgios in the BNP Paribas Open quarter-finals in Indian Wells.

A three-time champion in Indian Wells, Nadal returns to the semi-finals for the 11th time in the desert.

Down an early break in the opening set, Nadal broke the Kyrgios serve for the first time in the tournament as the Aussie served for the set at 5-4. The Aussie wild card had held in each of his 30 previous service games, saving nine break points on the way to the quarter-finals.

That break changed the colour of the match, as Kyrgios grew frustrated and Nadal began to repel his opponent’s power with greater success. A shutout tie-break ended on a point penalty for an audible obscenity, Kyrgios’ late outburst underscoring the extent of the turnaround to close the set.

But the Aussie steadied impressively in the second, dominating on serve and worrying Nadal by taking the initiative on the return throughout the set. The first break point of the set doubled as a set point for Kyrgios, who tracked down a drop shot and flicked a high backhand volley past Nadal to level the match in style.

A tight start to the final set included a short but testy exchange between Kyrgios and actor Ben Stiller, who was sitting front row center: “Are you any good at tennis?” Kyrgios remarked.

Soon after, Nadal earned his second break of the match on a double fault to lead 4-3. Two love holds gave him the victory in two hours and 46 minutes.

Nadal will next face the winner of the evening quarter-final between 12th seed Cameron Norrie and 19th seed Carlos Alcaraz.