How hoodlums shot at Lagos Govt officials, macheted others 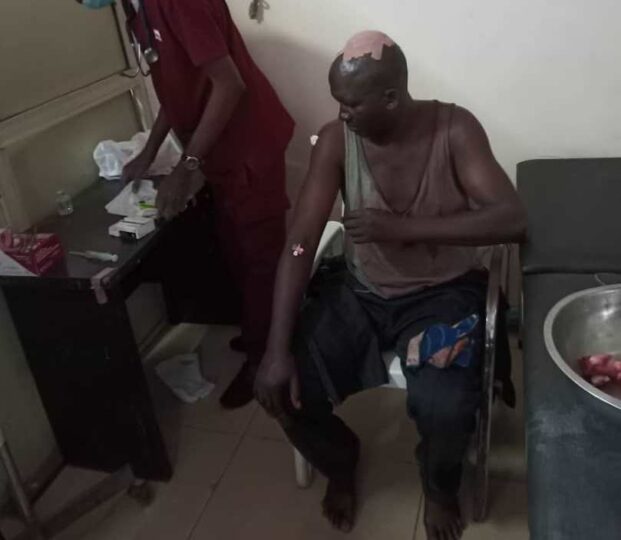 One of the injured officers

Hoodlums have attacked officials of the Lagos State Government with guns, machetes and other dangerous weapons, injuring some of the officials.

Officials of the Lagos State Physical Planning Permit Authority, LASPPPA, and the Lagos State Building Control Agency (LASBCA) had gone to remove the illegal construction at 1, Robinson Gbagi Street, Ajao Estate when suddenly some thugs armed with guns, cudgels, cutlasses and other dangerous weapons stormed the area and started shooting at officials and in the process causing mayhem in the area.

The Lagos State Government has strongly condemned the attack on its officials by thugs.

LASPPPA boss, Kehinde Osinaike said that one of LASBCA operatives who was macheted on his head and shoulder had been rushed to the hospital while others who sustained various forms of injuries were presently receiving first aid.

The General Manager noted that prior to the removal, a stop work order had been served on the site but rather than comply with Government directives, the owner broke the seal and continued with his activities while planning a well orchestrated attack on Government officials who were only carrying out their lawful duties.

He decried the incessant attacks on government officials on lawful assignments, warning that government would henceforth take decisive actions against perpetrators of such heinous acts.

Osinaike urged residents to always cooperate with LASPPPA/LASBCA and other agencies of government in the built environment of Lagos State, as they were out to ensure a seamless development of the State through sustainable practices in building construction.

His words: “developers and owners of properties should take heed and do the right thing by getting the necessary permits before starting building construction, failure to do this will attract the full wrath of the law as Government will continue to maintain zero tolerance for illegal, unauthorized and haphazard building construction in the State.”