Osimhen's double puts him in league with Salah, Eto'o, Weah 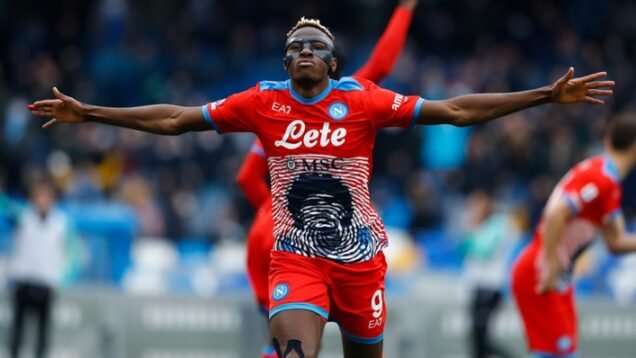 Nigeria’s Victor Osimhen has matched the Serie A goal feat of Mohamed Salah, Samuel Eto’o and George Weah as his double dragged Napoli to a 2-1 win over Udinese.

Gerard Deulofeu’s first-half strike edged Udinese ahead at the Diego Armando Maradona Stadium, before Osimhen came to the fore after the interval.

Not only did that keep Napoli, temporarily at least, on level terms with leaders Milan, but the two goals took him to 11 for the campaign in Serie A.

That makes Osimhen the first Nigerian to achieve double figures in two consecutive Serie A seasons.

He also became just the fourth African player to achieve the feat in the Italian top flight, after Weah for Milan, Eto’o for Inter and Salah for Roma.

The 23-year-old labelled the victory as essential in the hunt for Napoli’s first Scudetto since the 1989-90 season.

“The atmosphere was incredible. We had a good reaction after the first half. It was essential to win and I thank the fans for their support,” he told DAZN.

“We have to believe we can win the league. There are still eight games and we have to continue like this.”

Napoli will look to continue their title charge after the international break when they visit top-four chasers Atalanta.