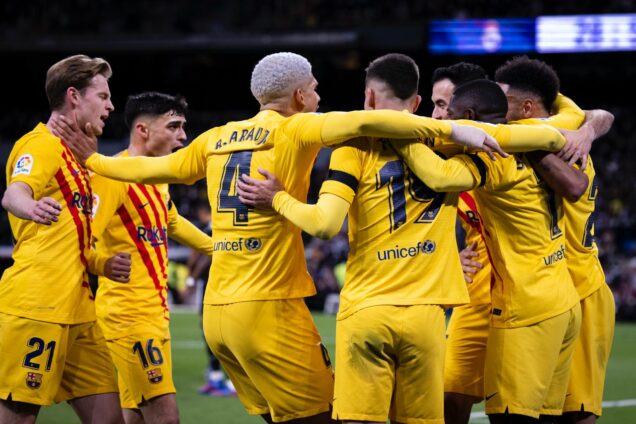 Pierre-Emerick Aubameyang hit a brace on Sunday as Barcelona crushed Real Madrid 4-0 in an El-Clasico match at the Santiago Bernabeu Stadium.

Madrid, playing without the playmaker, Karim Benzema, were a shadow of themselves as the visitors took control of the match from the beginning to the end.

A rejuvenated Barcelona deservedly took the lead on 29 minutes after Ousmane Dembele handed Aubameyang the simplest of tasks from close range after the cross evaded the keeper, and he made no mistake with his header into the left side of the goal.

Barcelona doubled their lead on 38 minutes after Ronald Araujo rose high to meet the corner from Ousmane Dembele and planted a low header into the middle of the goal, leaving Thibaut Courtois beaten.

Barcelona made it 3-0 on 47 minutes after Aubameyang displayed great vision and sent a pass to Ferran Torres, who showed brilliant composure inside the box to bury the ball into the top right corner.

On 52 minutes, Aubameyang scored the fourth goal for Barcelona but the assistant referee raised his flag and the referee blew his whistle and declared the goal offside.
After VAR check, the referee decided that it was a goal, making it 4-0 for the visitors.
It was a very bad night for Madrid, having won the last four El-Clasico. Today’s game was the 248th Clasicos.
Of the 248 competitive matches, Real Madrid have won the most, with 100 wins to Barca’s 96 and 52 ties.
Tags:   Barcelona   Pierre-Emerick Aubameyang   Real Madrid