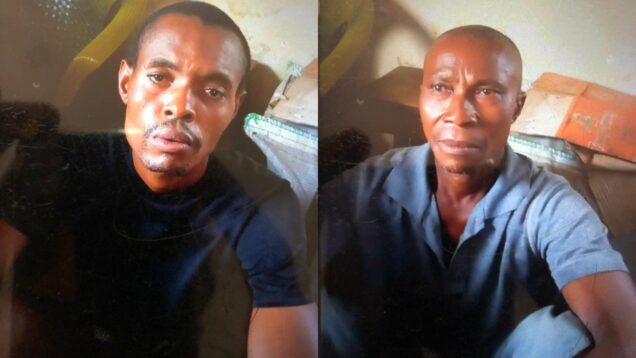 Peter Ezeala, 61 and Elochukwu Igwilo 27: arrested for defiling four minors in Umudim in Nnewi North LGA of the state.

Two men, Peter Ezeala, 61 and Elochukwu Igwilo, 27, have been arrested by the Police in Anambra for allegedly defiling four minors in Umudim, Nnewi in Nnewi North Local Government Area, of the state.

Ezeala and Igwilo were neighbours with the parents of the children they sexually violated.

Ikenga said the four children had been rescued and handed over for medical attention while the suspects had been charged to court.

According to him, investigation revealed that the mother of the victims, who is a trader, always leaves the children under the care of the suspects whenever she is out for her business.

“This became an opportunity for the suspects to take advantage of these kids who are 10 years, seven years, five years and 11 months respectively.

“Meanwhile, the case has been charged to court and the suspects remanded in the correctional services centre following adjournment of the case,” he stated.

Ikenga said the Commissioner of Police in the state, CP Echeng Echeng, had admonished parents and guardians to be wary of who they left their children and wards with.

He called on residents who noticed such violations and other crimes to report to the nearest police station for appropriate action. (NAN)(www.nannews.ng)