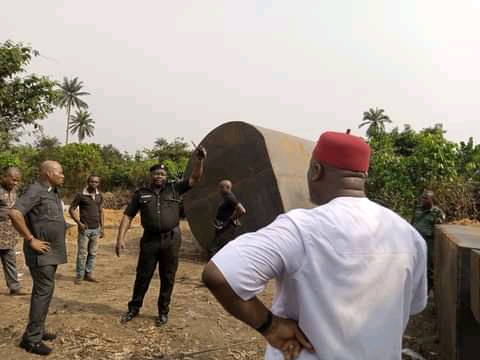 Chidi Lloyd, chairman of Emuoha LG of Rivers at a site of illegal refinery

The Chairman of Emohua Local Government Area of Rivers, Dr. Chidi Llyod has lamented that political appointees from Obelle community, regarded as one of the epicenters for illegal artisanal refining in the council area have refused to join the fight against the menace through provision of reliable information.

Llyod said this in reaction to the Sunday, March 20 bloody clash in Obelle over control of artisanal bunkering sites by rival cult gangs.

Consequently, he said political appointees from the community, specifically those from ward 5 will be replaced while they will also forfeit their March salary.

This, he said will be the punishment for their refusal to support efforts of local government to eradicate illegal artisanal petroleum refineries and cultism in their community.

In his statement announcing the measures, Lloyd also decried the mindless killings related to fight for control of proceeds of illegal artisanal petroleum refineries and cult activities in the Obelle community.

“All my appointees from Obelle community will not receive March salary if the mindless killings related to control of proceeds of illegal bunkering and cultism in the community continues,” said the Council chairman.

He stated that while the essence of appointing his aides was to help to nip crises in their areas in the bud as much as possible, none of the present appointees from Obelle is willing to volunteer information to security agents to enable them map out strategies to put a permanent end to the carnage.

Lyod said he has a duty to good citizens of Obelle and other community in the local government, to ensure that they live peacefully and go about their legitimate business and he has started consultations with stakeholders with a view to replacing all such indolent appointees.

“I use this medium to call on qualified indigenes of Obelle community, who wish to serve in my cabinet to immediately reach me directly in order to replace the ones there now. And such appointees must be resident in the community.”

He commended the Army, the Rivers Police Command and members of the the Emohua local government Area vigilante services, except those from Obelle for their rapid response to emergencies.