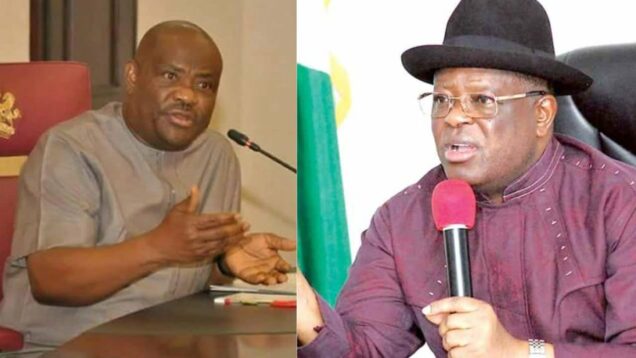 Governor of Ebonyi State David Umahi has labeled Governor of Rivers State Nyesome Wike as an illiterate who drinks a lot of alcohol.

Wike had earlier boasted that he was behind the ordeal of David Umahi, whose defection from the Peoples Democratic Party to the All Progressives Congress, led to a court judgment sacking him as governor of Ebonyi state.

Reacting to Wike’s remarks, Umahi said Wike acts like he is God.

Asked in an interview if he and his unnamed counterpart had personal grouse aside the politics of decamping to APC, Umahi said:

When pressured to name the governor he was referring to, Umahi said: “You should be the one telling me. You heard him on Channels boasting that he is behind. A mere man that depends on the breath of God. I pity illiteracy. It’s a shame. You are boosting to remove another governor.

“What qualifies you just because you’re packing money that is public fund? Not intellectual material but by just packing money from public funds and you are boasting about it. Otherwise, who were you?

“I became a billionaire at the age of 25. I’ve worked all my life and I have asked him to come for public debates.

“So, if he says he has done well and he is Mr this or that, let him come for a public debate with me. Let’s start with our childhoods. So I’m not disturbed.”

Asked whether his presidential ambition has died he said:

“It could be just your own imagination because there is no such thing. You can see us in the various media houses, you know, social media. You can see my supporters everywhere, you can see my consultation.