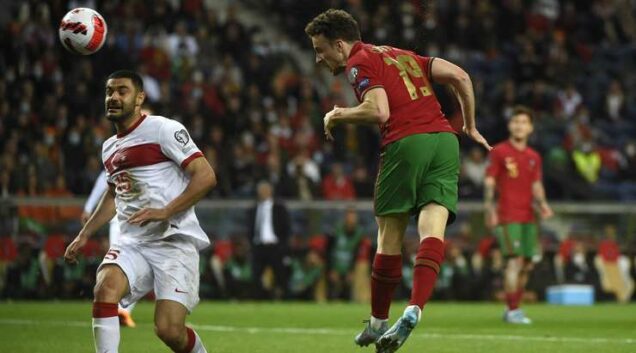 Portugal dominated possession and deservedly took the lead on 15 minutes from an Otavio goal.

Otavio was in the right place at the right time to get to the rebound inside the box and gleefully rifled the ball into the right side of the goal.

Diogo Jota made it 2-0 for Portugal, as he leapt to meet a beautiful cross and produced a header that went low inside the left post.

Turkey pulled one back on 65 minutes. Cengiz Under laid the ball off to Burak Yilmaz, who shot from close range into the top of the net, leaving the goalkeeper helpless.

Turkey missed a golden opportunity to equalise 83 minutes from the penalty spot, but Burak Yilmaz threw the ball away, as his poor effort went well over the crossbar.

The former European champions made it 3-1 on added time.

Rafael Leao played in Matheus Nunes, who showed great determination to get to the ball before a couple of defenders. He shot from inside the box into the right side of the net for a great finish.