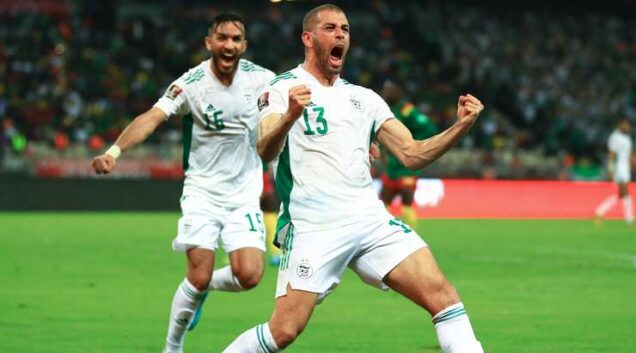 The Desert Warrior of Algeria broke a 38-year-old jinx on Friday as they defeated Cameroon for the first time in the first leg of the World Cup play-off in Yaounde.

Algeria have never beaten the Indomitable Lions of Cameroon in any competitive game since 1984.

But the visitors broke the jinx as they beat Cameroon 1-0 away from home to brighten their chances of qualifying for the Qatar 2022 World Cup.

The only goal of the match was scored by Islam Slimani in the 40th minute of the game and the Algerians held on to win the match.

Slimani out-jumped the defence in the centre of the box and connected with the free-kick from Youcef Belaili.

He sent the ball under the bar with his towering header and altered the score.

Cameroon dominated possession but it was the Algerians who scored with their only shot on goal from four-goal attempts.

The homers with 59 per cent ball possession had seven goal attempts and three shots on goal, but could not score.

Earlier on 14 minutes, Slimani darted into the penalty area to latch on to a pass, and he unleashed a shot towards the roof of the net, but Andre Onana was alert and denied him with a nice save.

In 85 minutes, Karl Toko Ekambi wasted a huge opportunity. The fans already began to celebrate as he unleashed a powerful low shot from the edge of the box after a brilliant solo effort.
The ball went towards the middle of the goal, but Rais M’Bolhi made a crucial save.
Algeria came close to scoring a second goal on added time. Ishak Belfodil peeled away from his marker and got on the end of a cross from Youcef Belaili, but he hit a shot just wide of the left post.
Tags:   Algeria   Cameroon