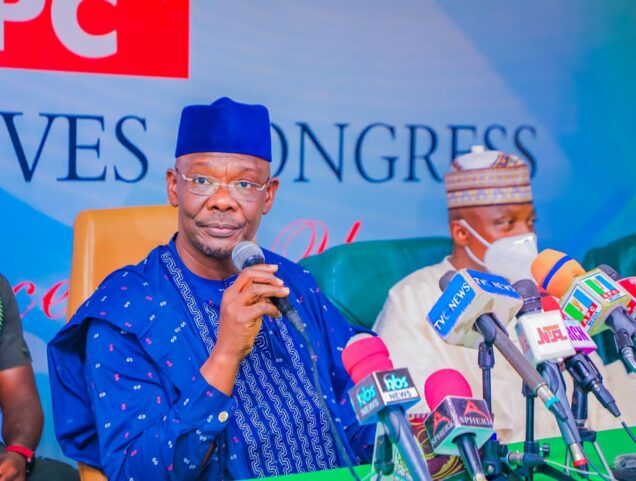 Gov. Abudulahi Sule of Nasarawa has said the leadership of All Progressives Congress, APC, is still working on getting an acceptable consensus candidate as first option for choosing the leadership of the party in its national convention billed for Saturday, March 26.

He said the consensus was to ensure a peaceful and rancor-free national convention.

Sule, who is the Chairman of the APC Sub-Committee on Media and Publicity, said this at a news conference on Friday in Abuja, at the party’s national secretariat.

“Before we go into the convention, our first choice is always consensus, and we are still on that first choice.

“However, democracy demands, even our party’s constitution and the constitution of Nigeria demands that if that doesn’t work, we’ll go ahead and look at the other options.

“But right now, that remains our option, number one,” he said.

He, however, said that Section 84(12) of the 2021 Electoral Act which restricted political appointees from being a voting delegate or be voted for at convention or congress of any political party, does not affect APC delegates to its convention.

The News Agency of Nigeria (NAN) recalls that Section 84 (12) of the recently amended 2021 Electoral Act, stated that, “no political appointee at any level shall be a voting delegate or be voted for at the convention or congress of any political party.”

It said this was especially for the purpose of the nomination of candidates for any election.

The implication of the act is that, except a political office holder or public servant resigned from office three months before the commencement of party primaries, he or she cannot be candidate for elections.

The Nasarawa governor, however, said the clause does not affect delegates to the APC national convention because they were classified statutory delegates.

He added that the party’s unity list was being worked on and would be made available when ready.

“If you are talking of consensus, you must have unity list, because that’s the whole essence of consensus,”he said.
Sule had earlier said that the APC leadership would be guided by the Electoral Act in the conduct of Saturday’s national convention.

NAN recalls that seven aspirants in the APC national chairmanship race had obtained and submitted their Expression of Interest and Nomination forms at the cost of N20 million each.

The Eagle Square, venue of the convention located in the Central Business District, is already wearing a new look with different shades of decorations.

No fewer than 4,000 delegates from across the country are expected to elect 66 officials, including 21 National Working Committee (NWC) members and 45 non NWC members to manage the party’s affairs for the next four years.

Itinerant traders took advantage of the large number of party faithful, both at the party secretariat and Eagle Square to carry out brisk business as they were seen selling branded T-shirts, wrappers, hats, key holders, wristbands and other souvenirs.

Heavy security presence had also been noticed not just at the Eagle Square, but around entrance to the venue..

Most hotels in Abuja city centre and in the satellite towns had been fully booked a week before the convention.