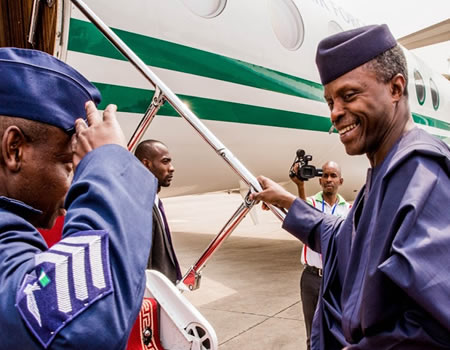 Vice President Yemi Osinbajo will be heading to Accra, Ghana today to represent Nigeria at an Extraordinary Summit of the ECOWAS Authority of Heads of State and Government on the political situation in Mali and other parts of the sub-region.

A statement issued by Laolu Akande, Senior Special Assistant to the President on Media & Publicity, said at the summit, Osinbajo would join other leaders from West Africa to review progress made by Mali’s military junta on the return of the country to democratic rule.

The summit will receive and consider an updated report from ECOWAS Mediator in Mali, Former President Goodluck Jonathan who visited Bamako between March 18 to 20 to meet with the head of the junta. The Heads of State will also review the situations in the Republics of Burkina Faso and Guinea.

Having condemned the military take over of governments in Mali, Guinea and Burkina Faso, imposing sanctions on the military junta in those countries, ECOWAS leaders at their last meeting in February affirmed that only democratically elected governments would be recognised and supported in West Africa.

Since last year, President Muhammadu Buhari has been delegating his deputy, the Vice President to represent Nigeria at a series of ECOWAS leaders’ summits on the particular issue of undemocratic, military takeover of governments in the region.

The Vice President will be accompanied by the Minister of State for Foreign Affairs, Ambassador Zubairu Dada, Special Adviser on Economic Matters, Dr. Adeyemi Dipeolu and other top Nigerian officials. The VP, who departs Nigeria from Lagos, is expected back in Abuja later today.