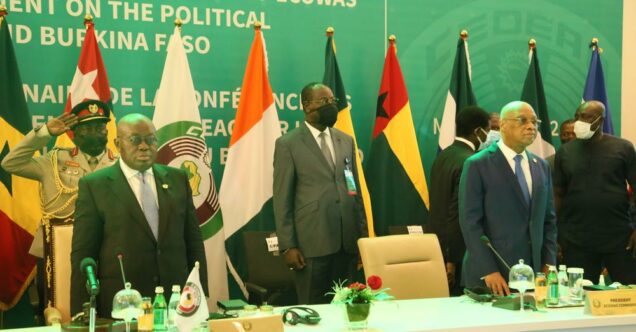 The Economic Community of West African States(ECOWAS) has insisted on a shorter period for transition to democracy in Mali, Guinea and Burkina Faso.

Vice President Yemi Osinbajo who attended the meeting told newsmen about the bloc’s decision after an Extraordinary Summit in Accra, Ghana.

The vice president said that although sanctions imposed by ECOWAS on countries where coups had taken place persisted, there should be no excuse for a prolonged transition back to democracy in Mali, Guinea and Burkina Faso.

“The major issues are the extent of compliance in the countries where there have been coups, which are Mali, Burkina Faso and Guinea, in particular, Mali.

“We received a report from the ECOWAS Mediator for Mali, former President Goodluck Jonathan, and his report was that we are at a point where the Malian authorities want longer period of transition but obviously ECOWAS is insisting on a much shorter period for transition.

“When the communique is issued it will reflect ECOWAS position which is that there is no excuse for long transition.

“And all that is required in the electoral process is to ensure that there should be free and fair elections; and there should be no extended period of transition,” he stated.

Osinbajo said that the authority was firm on the resolve that coups would not be tolerated and that it was completely undemocratic.

According to him, a few people cannot impose their way on the majority of the people of a country no matter what their motive may be.

“The whole point of democracy is that each individual has a right to choose his or her leader.

“I think that outrage has been well expressed by the Authority of the Heads of State and by the people of the ECOWAS region that we are in a democracy and we are not going to go back,” he said.

Others were Macky Sall, President of Senegal, and Dr Isatou Touray, Vice-President of The Gambia.

Mr Simfeitcheou Pre Minister and Special Advisor to the President of the Republic of Togo; Al Hassan Conteh, Liberian Ambassador to Nigeria and Permanent Representative to ECOWAS, among others, were at meeting.

In a communique, the authority urged the transition authorities in Mali to adhere to the additional period of 12 to 16 months which had been agreed by the joint technical teams of ECOWAS/AU/UN for the extension of the transition with effect from March 15.

“The authority decided to send the mediator to Mali to continue and finalise the discussions on the chronogramme with the Transition Authorities.

“It decided to uphold the sanctions imposed on Jan. 9 and continue the dialogue with a view to reaching an agreement to ensure a gradual lifting of the sanctions.

“It called on partners to increase their humanitarian support to Mali.”

On the social and political situation in Guinea, the authority expressed serious concern over the lack of visibility on the transition.

“It demands the finalisation of an acceptable transition timetable no later than 25th April 2022; after this deadline, economic and financial sanctions will be immediately applied.”

On the social and political situation in Burkina Faso, the authority expressed deep concern at the continued detention of former President Christian Kaboré since the coup d’etat, in spite of several appeals for his unconditional release.

“Similarly, the authority remains very concerned about the duration of the transition period set for thirty-six (36) months by the Transition Charter.

“Demands the immediate and unconditional release of President Kaboré; to uphold the suspension of Burkina Faso from all ECOWAS institutions until constitutional order is restored.

“Finally, the authority calls on the African Union, the United Nations and all bilateral and multilateral partners to continue to support ECOWAS measures in Mali, Guinea and Burkina Faso, to maintain peace and stability in the region,’’ the communiqué said.