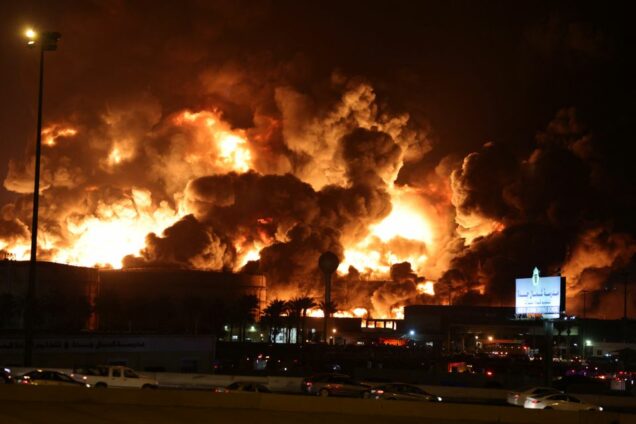 Fire at Saudi Aramco's petroleum storage facility, after an attack, in Jeddah

The attack caused a fire in two storage tanks but no casualties.

A huge plume of black smoke could be seen rising over the Red Sea city where the Saudi Arabian Grand Prix is taking place this weekend, an eyewitness said.

The Iran-aligned Houthis have escalated attacks on the kingdom’s oil facilities in recent weeks and ahead of a temporary truce for the Muslim holy month of Ramadan.

The coalition has repeatedly said it is exercising self-restraint in the face of the attacks.

But it launched a military operation in Yemen early on Saturday saying it aimed to protect global energy sources and ensure supply chains.

A coalition statement on state media on Friday said the fire had been brought under control.

The Saudi energy ministry said the kingdom strongly condemned the “sabotage attacks”, reiterating that it would not bear responsibility for any global oil supply disruptions resulting from such attacks, state news agency SPA reported, citing an official in the ministry.

The ministry blamed Iran for continuing to arm the Houthis with ballistic missiles and advanced drones, stressing that the attacks “would lead to impacting the Kingdom’s production capacity and its ability to fulfil its obligations to global markets”.