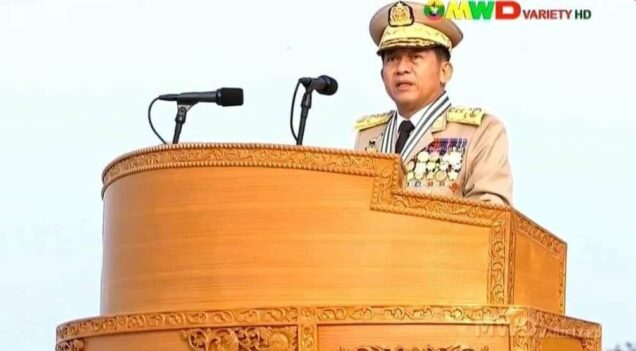 Min Aung Hlaing, speaking at a military parade marking Armed Forces Day, also urged ethnic minorities not to support groups opposed to army rule and ruled out negotiations with them.

Security forces used lethal force to suppress mass nationwide protests, resulting in the deaths of more than 1,700 civilians, according to a detailed tally compiled by the Assistance Association for Political Prisoners.

Forced to turn away from peaceful protests, many of those opposed to military rule took up arms, forming hundreds of militia groups called People’s Defense Forces — better known as PDFs.

In some parts of the country, they’ve joined forces with well-organized, battle-hardened ethnic armed groups, which have been fighting for greater autonomy for decades.

Min Aung Hlaing, speaking to thousands of military personnel at the annual Armed Forces Day parade in the capital Naypyitaw, said he would not negotiate with “terrorist groups and their supporters for killing innocent people” and threatening peace and security.

He said the military — known as the Tatmadaw — “will annihilate them to (the) end,” according to an official translation of his speech.

His government has declared major resistance organizations — regardless of whether they are directly engaged in armed struggle — as terrorist groups.

Membership or even contact with them carries harsh punishment under law.

“I would like to highlight that there are no governments or armies worldwide that negotiate with any terrorist groups,” he said.

Despite a huge advantage in equipment and numbers, Myanmar’s military has struggled to crush the new militia units.

Outgunned and outmanned, the PDFs have relied on support from local communities and knowledge of the terrain to carry out often surprisingly effective attacks on convoys, patrols, guard posts, police stations and isolated bases in remote areas.

The military is currently conducting operations in Sagaing, in upper central Myanmar, and in Kayah State, in the country’s east, using airstrikes, artillery barrages and the burning of villages. The army recently seems to have expanded its offensive into Chin State in the west and Kayin State in the southeast as well.

Last year’s Armed Forces Day was the single bloodiest since the military’s Feb. 1, 2021, seizure of power.

Security forces across the country opened fire on demonstrators, killing as many as 160 people.

Anti-military protests called were held Sunday despite the risks in Yangon, the country’s biggest city, and elsewhere.

To avoid arrest or injury, urban street protests usually involve flash mobs, which can run away before security forces crack down.

The main opposition group, the self-styled National Unity Government, urged people to join a “Power Strike” Sunday night by switching off the lights and their televisions for 30 minutes while the military parade is broadcast on state-run TV channels.

The group said the strike also is intended to protest daily power outages. The blackouts started several months ago, and the government blames them on high gas prices and damage to power lines caused by sabotage.