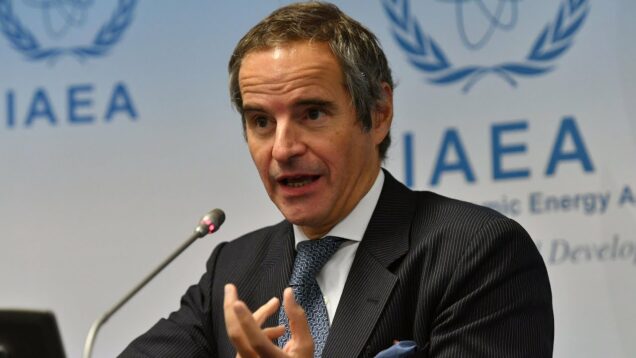 Since Russia invaded Ukraine last month, Grossi has called on both countries to urgently agree on a framework to ensure nuclear facilities, including the radioactive waste facilities at Chernobyl and Europe’s biggest nuclear power plant at Zaporizhzhia, are safe and secure.

International Atomic Energy Agency chief Grossi has so far failed to obtain such an agreement or a three-way meeting with Ukraine and Russia such as one he wanted to happen at Chernobyl, which like Zaporizhzhia, is held by Russian troops.

He met their foreign ministers separately in Turkey almost three weeks ago.

“Just crossed the border into #Ukraine to start (the IAEA’s) mission to ensure the safety and security of the country’s nuclear facilities. We must act now to help prevent the danger of a nuclear accident,” Grossi said on Twitter.

The IAEA said in a separate statement that it would start delivering assistance at Ukraine’s request but the extent of that help was unclear since it also said Grossi would hold talks with senior Ukrainian officials on the aid, suggesting at least some details still needed to be ironed out.

The statement did not mention Russia.

The IAEA said it had drawn up “concrete and detailed” assistance plans for sites including Ukraine’s four operating nuclear power plants and Chernobyl, where radioactive waste facilities operate near the now-defunct power plant that in 1986 was the site of the world’s worst nuclear accident.