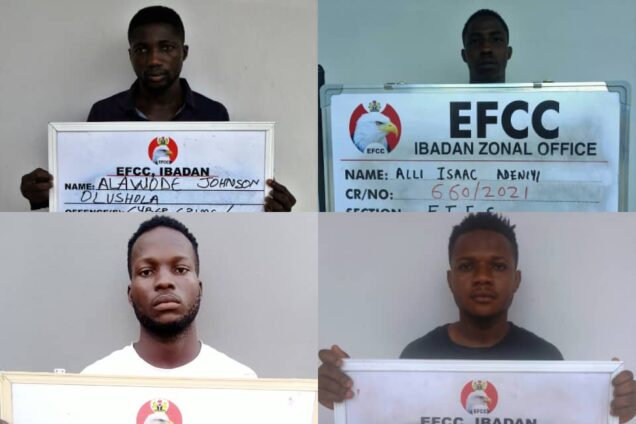 The Ibadan Zonal Command of the Economic and Financial Crimes Commission, EFCC, on Tuesday secured the conviction and sentencing of four cyber fraudsters before Justice Uche Agomoh of the Federal High Court sitting in Ibadan, Oyo State.

Kareem Faisol Iretiayo, Olusola Johnson Alawode, Alli Isaac Adeniyi and Adekunle Salau Kehinde were convicted after pleading guilty to separate counts which bordered on fraudulent impersonation, contrary to Section 22 (2) (b) (i) and punishable under Section 22(3) of the Cybercrimes (Prohibition, Prevention etc.) Act,

Adekunle was ordered to restitute the sum of $3,000USD and forfeit one iPhone 11 Pro and the sum of N33, 083. 19 to the Federal Government of Nigeria.

Furthermore, Kareem was ordered to restitute $2,300USD and forfeit one itel phone to the Federal Government of Nigeria.

Alawode was ordered to pay the sum of N150, 000. 00  in restitution and forfeit one Lexus E350, one HP Laptop, one iPhone X and Techno Spark mobile phones to the Federal government of Nigeria.