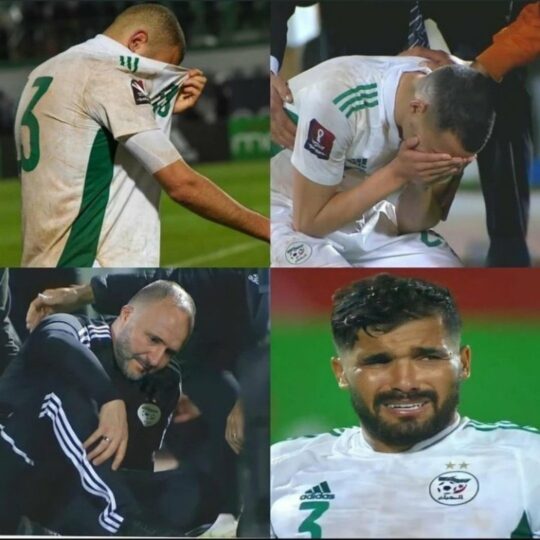 Algeria players and coach in tears after losing 2022 World Cup ticket to Cameroon.

The Algeria Football Federation (FAF) has called for a replay of their World Cup playoff clash against Cameroon and lodged a complaint with FIFA over the match’s refereeing.

The Federation claimed the officiating “distorted the result”.

Karl Toko Ekambi delivered the decisive strike in the fourth added minute of extra time in Blida on Tuesday to condemn Algeria to a 2-1 aggregate loss on away goals.

Cameroon went on to qualify for Qatar 2022.

Islam Slimani saw two goals ruled out, the first in the second half and again in extra time.

Referee Bakary Gassama initially allowed the latter goal to stand before using the pitch-side monitor to deem the Algeria striker had handled the ball.

Charaf-Eddine Amara has resigned as president of FAF in the wake of Algeria’s exit from World Cup qualifying, while the federation has lodged an appeal to the world governing body FIFA.

“The Algerian Football Federation (FAF) has lodged an appeal with the International Federation of Association Football (FIFA) against the scandalous arbitration which distorted the result of the Algeria-Cameroon playoff,” the statement read.

“The FAF is determined to use all legally permitted means to have its rights restored and to replay the match under conditions guaranteeing the honesty and partiality of the arbitration.

“The FAF also requests the opening of an investigation by FIFA bodies to shed light on the arbitration of the Algeria-Cameroon match.”

The draw for the group stage of the World Cup is set to take place on Friday.