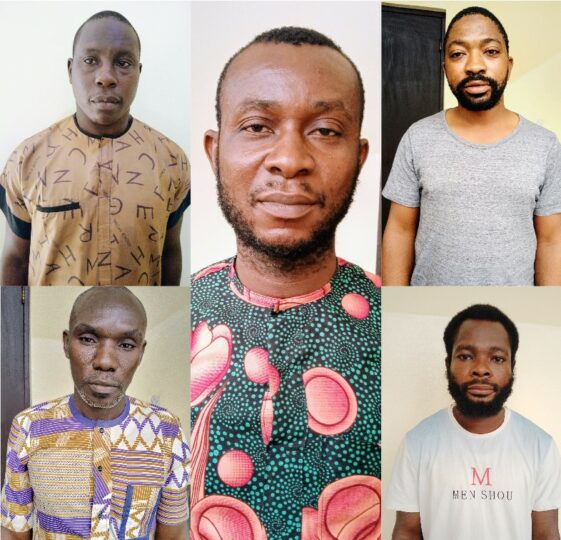 Five oil thieves have been convicted and sentenced to separate jail terms for illegal dealing in petroleum products without requisite licenses in Port Harcourt.

They were all jailed after pleading “guilty” to one- count of separate charges preferred against them by the Port Harcourt Zonal Command of the Economic and Financial Crimes Commission (EFCC).

The lone count charge read: “That you Owei Ibolo on or about the 6th day of December, 2021around the Creek of Akassa River, Bayelsa State within the jurisdiction of this Honourable Court did without lawful authority and license dealt in Crude Oil to wit: about 700,000 litres conveyed in MT. TIS IV thereby committed an offence contrary to Section 1 (17) (a) of the Miscellaneous Offences Act, Cap M17, of the Revised Edition (Laws of the Federation of Nigeria) 2007 and punishable under Section 1 (17) (b) of the same Act”

Given their pleas of “guilty”, prosecution counsel: J. N. Dogonyaro and B. C. Kadiri, prayed the court to convict and sentence them as charged.

Counsel to the defendants: M. M. Suleiman and B. C. Okeadaka prayed the court to temper justice with mercy, insisting that, “they are first-time offenders and do not have previous criminal records”.

Justices Ayuba convicted and sentenced Taoheed, Savior, Ibolo and Edet to two years imprisonment each, with an option of a fine of Two Hundred Thousand Naira (N200, 000) each, payable into the Consolidated Revenue Account of the Federal Government.

While Justice Pam sentenced Alani to two years (2) imprisonment, with an option of a fine of Two Hundred Thousand Naira (N200, 000) payable into the Consolidated Revenue Account of the Federal Government of Nigeria.

He also ordered that the Automotive Gas Oil (AGO) transported in a Toyota Camry car, with Registration Number Lagos NF 301KJA, be forfeited to the Federal Government of Nigeria.

The products, he ruled, should be sounded and sold by the Secreta9ry of EFCC or any other person authorized by him and the proceeds paid into the EFCC Recovery Account domiciled in the Central Bank of Nigeria, and the vehicle released to the owner.

Both judges ordered that the convicts should depose to affidavits of good behaviour before the court.