Navy hands over nine oil thieves to NSCDC in Bayelsa 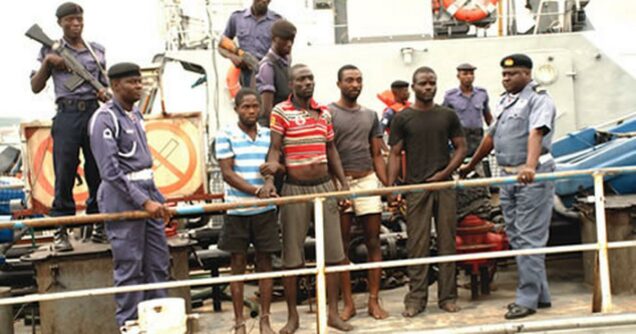 The Nigerian Navy handed over nine suspected crude oil thieves to officials of the Nigerian Security and Civil Defence Corps (NSCDC) in Yenagoa on Friday.

Items recovered from the suspects were one locally-made pistol, welding equipment, a 7.5 KVA generating set and a grinding machine.

Babatunde said the nine suspects were arrested on March 28 over their involvement in the illegal refining of stolen crude oil.

He added that the arrest was made when Navy personnel were on patrol along Phillip Camp Creeks in Akassa axis of Brass Local Government Area of Bayelsa.

He said the petrol team impounded a large wooden boat and also discovered an illegal refining site, which had three metal tanks containing 20,000 litres of diesel.

“I assure that the Navy will continue to clamp down on crude oil theft and illegal refining,’’ he said.

He said the arrest was one of the numerous successes recorded by the Nigerian Navy in its ongoing operations to rid Nigeria’s maritime environment of criminality.

He said the Navy was determined to create a secure maritime environment for economic activities to thrive.

Mrs Christina Okafor of the Special Duty Unit of the NSCDC, Yenagoa, who received the suspects, reiterated the readiness of the corps to carry out a thorough investigation into the matter for possible prosecution.

She urged criminals to desist from oil theft and engage in a legitimate business.