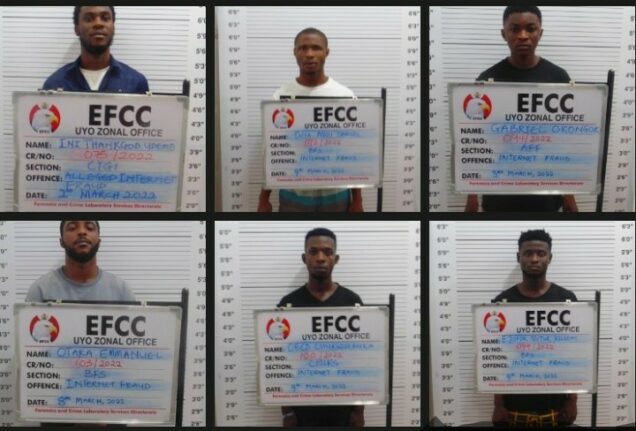 Some of the convicts

A Federal High Court in Calabar, Cross River State, presided over by Justice Ijeoma Ojukwu has convicted one Obed Chukwuemeka Great, a student of the University of Calabar, and 13 others for offences bordering on criminal impersonation with intent to defraud.

The defendants were arraigned on different dates, and they pleaded ‘guilty’ to the separate one count charge preferred against them by the Uyo Zonal Command of the Economic and Financial Crimes Commission, EFCC.

One of the charge reads: “That you, Ejiofor Victor sometimes in 2022 in Nigeria within the jurisdiction of this Honourable Court with intent to obtain property and gain advantage for yourself, fraudulently presented yourself as Peter Weller and James Garland, an American Bitcoin manager, to your victims on Facebook and Instagram and obtained the sum of Two Thousand Dollars ($2,000) and thereby committed an offence contrary to Section 22 (2) (b)(i) and (ii) of the Cyber Crime (Prohibition, Prevention Etc) Act 2015 and punishable under Section 22 (b) (iv) of the same Act”.

In view of their pleas, the prosecution counsel, Segun Akinrinlade, prayed the court to convict and sentence the defendants accordingly.

But Justice Ojukwu convicted and sentenced the defendants as follows:

While Obed Chukwuemeka Great, Otaka Emmanuel, Owolabi Kolawole, Ekima Ujiokoyo, David Osas, Gabriel Ogbu and Ihemekwelam Uriel Chkwuemeka were sentenced to 1year imprisonment each with the option of a fine of N800, 000 except Ogbu who bagged 6 months imprisonment with same option of fine.

The convicts were arrested at different locations within Cross River and Akwa Ibom States on February 22, 2022 and March 1, 2022 by operatives of the Commission, during sting operations.