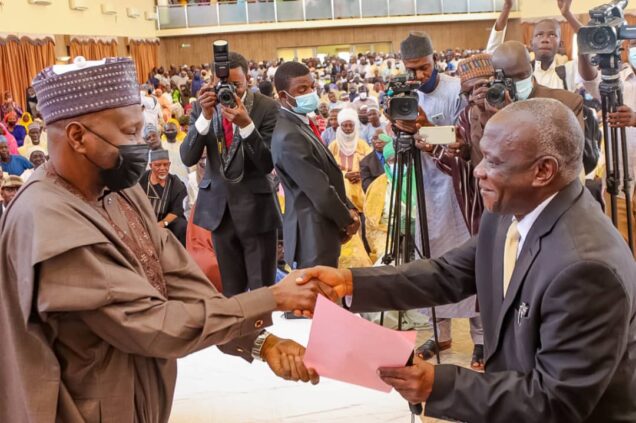 Gov. Inuwa Yahaya swears in Justice Joseph Awak as the substantive Chief Judge of the state

Gov. Inuwa Yahaya of Gombe State, on Friday, swore in Justice Joseph Awak, as the substantive Chief Judge of the state.

Yahaya said Awak was found worthy to serve the state in that capacity.

He said Awak was qualified having served in an acting capacity since Jan. 2, following the retirement of the former Acting Chief Judge, Justice Mu’azu Pindiga.

“Following the recommendation of the Judicial Service Commission on March 16, 2022, as required by the constitution, I approved the appointment of Justice Awak as the substantive head of the State High Court of Justice.

“The appointment was ratified by the honourable members of the Gombe State House of Assembly,” the governor said.

Yahaya said Awak was appointed based on his many years of meritorious and selfless service.

“He is well known for his sterling qualities befitting of a top-ranking judicial officer,” he said.

The governor expressed optimism that the new chief judge would discharge his duties with utmost commitment and integrity as he had done for the benefit of the state.

Yahaya urged him to ensure an incorruptible judiciary where justice would be dispensed to all manner of people in the state without discrimination, fear or favour.

According to him, such is needed to help address the myriad of challenges facing the nation through swift, sure and fair administration of justice.

He pledged to ensure the independence of the judiciary in the state for the speedy delivery of justice.