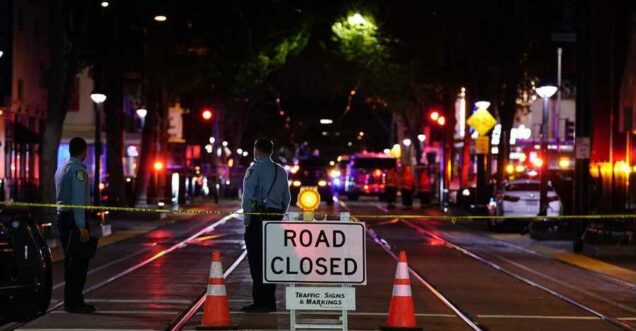 Police in Sacramento at dawn on Sunday after the mass shooting

Six people were killed before dawn Sunday in Sacramento, California when shots were fired into crowds as bars and nightclubs emptied for the night.

Twelve other people were also shot and wounded in the melee and at least four of them suffered critical injuries, officials said.

It was the second mass shooting in five weeks in California’s capital city.

The suspect — or possibly suspects — were still at large Sunday afternoon and authorities said they had recovered at least one firearm.

They were reviewing video footage posted to social media that showed what appeared to be an altercation before the gunfire erupted.

Police in a statement said it’s not yet clear if the fight was related to the shooting.

The crime scene stretched across multiple city blocks, with dozens of blue and yellow evidence markers dotting the pavement. Several of those who were wounded battled life-threatening gunshot injuries in hospitals.

Kelsey Schar was staying on the fourth floor of Citizen Hotel when she said she heard gunshots and saw flashes in the dark. She walked to the window and “saw a guy running and just shooting,” Schar told The Associated Press in an interview.

A video posted on Twitter showed people running through the street amid the sounds of rapid gunfire in the city of about 525,000 located 75 miles (120 kilometers) from San Francisco.

The area where the violence occurred on the outskirts of the city’s main entertainment district is packed with restaurants and bars. Nightclubs close at 2 a.m. and it’s normal for streets to be full of people at that hour.

The district is anchored by the Golden One Center that attracts big-name concerts and is home to the NBA’s Sacramento Kings. City officials have invested heavily in the area to promote development in the area.

“This morning our city has a broken heart,” Sacramento Mayor Darrell Steinberg said. “We don’t know all the facts but we know there were mass casualties in a very short amount of time.”