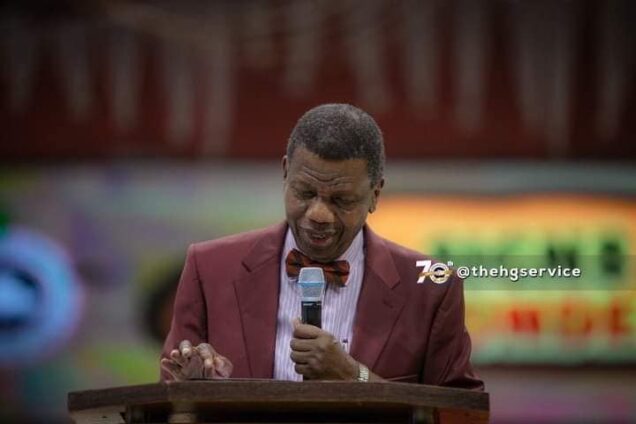 Adeboye at the Holy Ghost service on Saturday

General Overseer of the Redeemed Christian Church of God, Pastor Enoch Adebayo, spent much of his sermon Sunday at the Holy Ghost thanksgiving to speak on the state of the nation.

He spoke on the state of insecurity, 2023 election and the oil theft going on in Niger Delta and fears that Nigeria is moving “steadily towards bankruptcy”.

Athough the respected cleric urged Nigerians to register and vote in the 2023 elections, he said he was not sure if the election will hold.

According to him, God has not spoken to him about the elections unlike in 2019 when God revealed things to him before the elections.

Adeboye also reacted to recent cases of attacks and killings in Kaduna State.

“Today, it is Kaduna, who knows where next?

“So I laugh when people start talking about 2023 elections because even me I don’t know yet if there’ll be an election.

“During the last (2019) election, I knew there will be an election in August (2018) the previous year because he (God) has told me about it.

Pastor Adeboye also disassociated himself from partisan politics and insinuations that the RCCG is supporting a political party.

“I have said it before, and I will say it again, I am not and will never be a politician, I am a pastor – that is what God has called me to be,”

“Please do not distract me. My assignment is to be a pastor; to pray for you, to pray for nations including Nigeria.”

The sermon also dwelled on the massive crude theft in Niger Delta, where 10 percent of Nigeria’s crude is stolen.

He said more than 90 percent of Nigeria’s income is used to service debt.