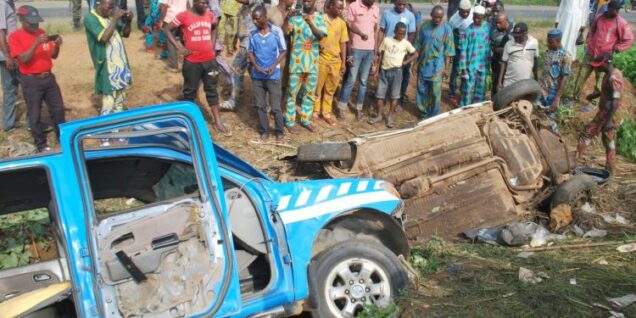 Unidentified gunmen have killed two members of a Federal Road Safety Corps team on a routine patrol on Igbo-Uku-Uga route in Anambra state.

One was critically injured.

The patrol team was made up of an Officer, a driver and two other staff.

The team was conducting routine patrol operations today at about 2:45 pm when the gunmen opened fire on them.

One escaped into the bush.

“The team leader was rushed to the hospital after sustaining severe injuries from the attack”, Kazeem said..

The Corps Marshal, Dr Boboye Oyeyemi has condemned the attack.

He has also condoled with the families of the deceased staff, the Unit Commander and Staff of Igbo-Uku Command, and the entire Management and Staff of the Corps over the loss.

Oyeyemi also assured that the Corps is already working with the Nigerian Police Force and other relevant Security agencies to ensure that the perpetrators of this wicked act are arrested and allowed to face the full weight of the law.