God revealed to me that Atiku will be president - Dino Melaye 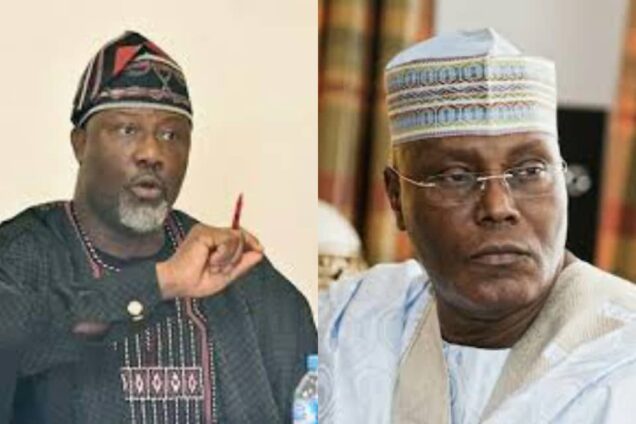 Controversial ex-lawmaker, Senator Dino Melaye on Monday said God revealed to him that former Vice President Atiku Abubakar would be president in 2023.

Melaye spoke at the submission of Atiku’s expression of interest and nomination forms for the presidential election at the PDP National Secretariat, Abuja, on Monday.

Melaye, described Abubakar as a man with multiple competencies and a unifier.

“We are here to submit to you the form of a Nigerian with multiple competences, indoctrinated with the art of civil administration and the rudiments of politics, the only unifier.

Speaking after submitting the form, the Chairman, Technical Committee, Atiku Abubakar Presidential Project, High Chief Raymond Dokpesi, expressed confidence that the Peoples Democratic Party (PDP) zoning arrangement would not be against the presidential ambition of Atiku.

Asked what was the position of Abubakar about zoning the PDP presidential ticket, Dokpesi said that Abubakar had nothing against zoning.

“By the special grace of God, when we get to the bridge, we will cross it. I am not aware of any internal problems in the PDP. No crisis whatsoever. PDP is one big family; we shall all be together as brothers and sisters.

“Definitely, we have nothing against whatever the party will decide, but the zoning will not be against us,” he said.

Dokpesi said that forms submitted on behalf of Abubakar were duly completed and signed.